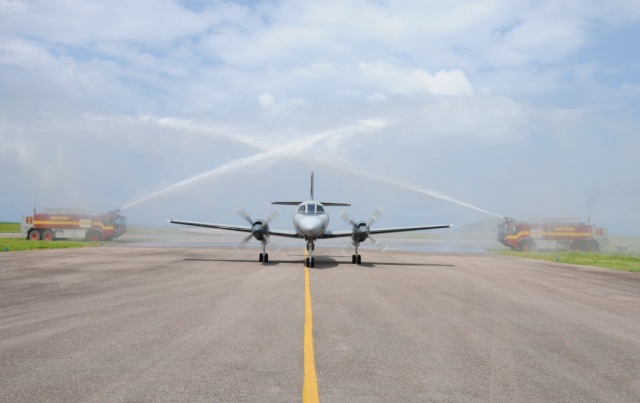 Seychelles airport fire engines give the aircraft a water cannon salute after its 1,000th flight. The plane is a Swearingen SW3C Merlin (EUNAVFOR)

The Luxembourg’s Swearingen SW3C Merlin plane has been leased by the force from CAE Aviation and has been making the sorties from the Indian Ocean archipelago’s main airport since October 2009.

Occasionally operating from Kenyan port city of Mombasa and Mayotte, the surveillance aircraft team has flown over 5,600 hours since then and has been involved in the successful disruption of more than 37 pirate groups, giving aerial support during several search and rescue missions in the region.

It took part, for example, in the rescue of the crew from a Chinese fishing vessel and dozens of survivors from a ferry boat that sank near Zanzibar.

Last week, the Luxemburg detachment located a Seychelles fishing vessel that had sent out a distress message and was missing for more than three days, said the EU Naval force statement.

The aircraft’s mission is to locate suspected pirate vessels, mother ships and skiffs and to help build up a complete maritime picture of situations at sea.

General » Be a reporter: Write and send your article » Subscribe for news alert
Tags: EUNAVFOR, piracy