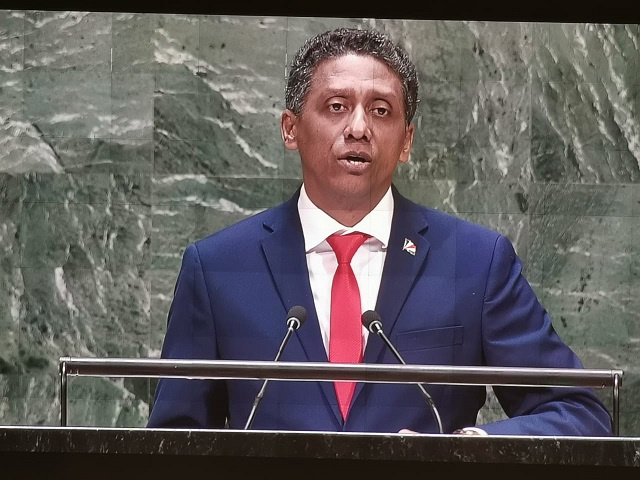 (Seychelles News Agency) - The President of Seychelles has highlighted and lauded the increasing interest young people are taking in advancing the fight against climate change.

Danny Faure was addressing world leaders on Wednesday at the 74th Session of the United Nations General Assembly in New York.

“Fortunately, young people around the world have taken a stand to secure their future. In Seychelles, we are seeing youth-led NGOs partnering with the Government to prioritise the fight against climate change, pollution and other threats to the environment,” said Faure.

The head of state added: ”Youth-led grassroots movement led to a ban on many single-use plastics, and they continue to advocate for ocean protection. “

“More than most, island nations must have faith in the multilateral international order. We are by nature isolated and by design our livelihoods are tied to the rest of the world. We rely heavily on this premise as well as on the actions or inactions of others for our very survival,” said the president.

In relation to Ocean Climate Action, Faure further pledged that Seychelles will remain at the forefront of the discourse on climate change and in further ensuring that citizens of the world, continue to be guardians of two-thirds of the common blue planet; the Ocean.

“To us islanders, the ocean represents not only our livelihood but also a way of life. Our pioneering development of the Blue Economy has the potential to unlock multiplier effects, which will increase economic opportunities whilst equally protecting the ocean for generations to come. In our view, the ocean is the last frontier- if used responsibly it will lead to shared prosperity, food security and innovation,” explained the President.

The Head of state added, “Seychelles is 100% committed to the ongoing work by the United Nations to develop a legally binding framework to conserve our oceans, in areas outside national borders. If we want to survive, this is the only way forward.”