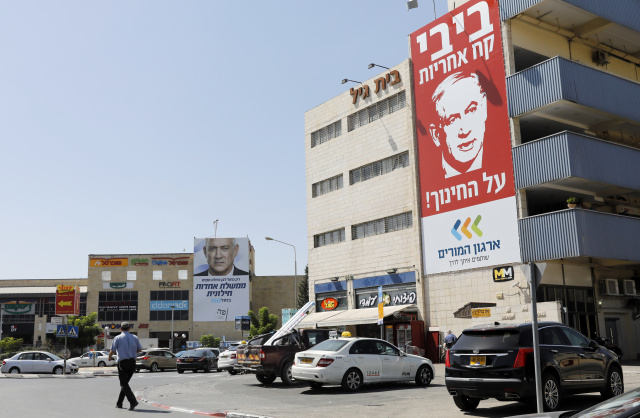 A picture taken on September 26, 2019 in Jerusalem shows an electoral banner (L) for Israel's Blue and White (Kahol Lavan) electoral alliance bearing the portrait of retired general Benny Gantz with a caption in Hebrew reading "only with the Blue and White we will create a united secular government" hanging on the facade of a building, and another billboard (R) showing the face of Prime Minister and Likud party chairman Benjamin Netanyahu with a caption in Hebrew reading "Bibi takes responsibility for education". (AHMAD GHARABLI / AFP)

(AFP) - Israeli Prime Minister Benjamin Netanyahu launched into what could prove to be an impossible mission to form a new government Thursday after the president tasked him with doing so following deadlocked elections.

The mandate from President Reuven Rivlin on Wednesday night gave Netanyahu a temporary victory, but he must now cobble together a coalition without a clear path to a majority.

He will attempt to do so while facing potential corruption charges pending a hearing scheduled for October 2-3, and there are warnings that Israel could soon find itself headed to yet another election -- a third since April.

When accepting the mandate, Netanyahu again called on his main opponent Benny Gantz to join him in a unity government, but his challenger dismissed the premier's negotiating tactics so far as unserious.

Gantz says he should be prime minister under a unity government since his centrist Blue and White party finished as the largest, while also insisting he will not serve in a government with a premier facing a serious indictment.

Blue and White has sought to convince members of Netanyahu's right-wing Likud to replace him as leader and form a unity government together, but there is no sign for now of that happening.

The situation has led Netanyahu's critics to accuse him of effectively holding the country hostage, arguing that a unity coalition would be possible if he would step down.

But Netanyahu points out he has the support of more smaller parties in parliament than Gantz and has vowed not to abandon them in coalition talks.

He has given no indication he would willingly give up the post he has held for more than 13 years in all, a tenure that has made him Israel's longest-serving prime minister.

"Benny Gantz is a better person than him and will be a better prime minister than him," Lapid wrote on Facebook.

"More people voted for (Blue and White) than for the Likud. They did so because they believe it's time for a discourse on values and a change of direction."

"We realise that if we form a unity government, Netanyahu will not be prime minister for an entire term," he said.

Allegations of corruption have led Blue and White to take a hard line on a potential coalition.

Netanyahu's legal team is to present its arguments to the justice ministry on Wednesday and Thursday, after the attorney general in February said he intended to indict the premier for bribery, fraud and breach of trust pending the hearing.

The prime minister strongly denies any wrongdoing and on Thursday asked the attorney general to broadcast the hearing live as he has "nothing to hide."

Likud officials have sought to shift blame for a possible third election onto Gantz -- a position Blue and White describes as absurd.

"At the moment, the option of third elections is more likely," Levin said.

Rivlin urged Gantz and Netanyahu to form a unity government before his announcement Wednesday, but was unable to lead them to a deal.

He proposed that the law be changed to allow Netanyahu to step aside for an indefinite amount of time to deal with his legal cases and Gantz serve as acting prime minister in the interim.

Levin said Likud was willing to negotiate on that basis.

In what appeared to be a sign of how far apart the two sides are, Levin said Likud invited Blue and White's negotiators for talks on Thursday, but they declined.

On Wednesday night, Blue and White negotiators also declined a meeting at Rivlin's residence before the president's announcement, he said.

Final results from September 17 voting gave Blue and White 33 seats, ahead of Likud's 32, in the 120-seat parliament.

Netanyahu will now have 28 days to form a government, with a possible two-week extension.

If all attempts fail, Rivlin can then assign the task to someone else or ask 61 members of parliament to agree on a candidate.

There were signs Thursday that Gantz may prefer that Netanyahu has the first chance at forming a government, betting he will fail.

Ayman Odeh, head of the mainly Arab Joint List, which won 13 seats, said he was contacted by a Blue and White candidate and asked to limit his alliance's endorsement of Gantz as premier.

While the Arab alliance backed Gantz for prime minister, one of the parties within it accounting for three seats declined to join the endorsement.

That left Gantz with the endorsements of 54 parliament members compared to Netanyahu's 55.

Odeh said on his Facebook page that Blue and White believed "Netanyahu will fail to form a government and then Gantz will be asked".