Residents protest in Seychelles over compensation payment from 2010 palace construction 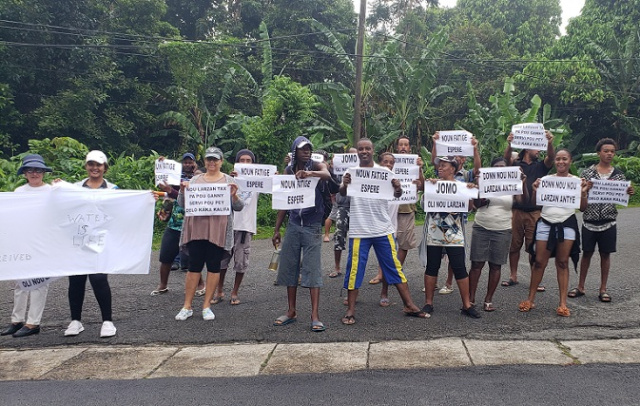 The residents of the sub-district of La Misere initially blocked the entrance of Kennedy Road, which leads to the palace. (Seychelles News Agency)

(Seychelles News Agency) - Angry residents of the western district of Grand Anse on the main island of Mahe took to the streets on Thursday to protest overpayment of compensation for a water contamination which occurred during the construction of Sheikh Khalifa bin Zayed al-Nahyan’s palace complex in 2010.

The around fifty residents of the sub-district of La Misere initially blocked the entrance of Kennedy Road, which leads to the palace. They later moved to Victoria, the capital city of the Seychelles, where they gathered in front of Liberty House, which houses the headquarters of the Ministry of Finance.

Their main issue of contention was the announcement made on Wednesday in the National Assembly by the Minister responsible for Finance, Maurice Loustau-Lalanne that the $15 million that will be used to settle the second round of compensation claims will be borne by Seychelles' government.

Loustau-Lalanne was in the National Assembly to answer an urgent question from the elected member of the district, Waven William, on the compensation payment.

The compensation -- a top-up on what was initially paid in 2013 -- was announced by President Danny Faure last year.

Speaking to SNA, one of the organisers of the protest, Lydia Jumeau, said the group was against the government footing the bill.

“We don’t want the taxpayer’s money, our money, to be used to pay the compensation. It is another burden on the country. This should be the responsibility of those who caused the pollution in the first place,” said Jumeau.

Jumeau added that the protesters were also enquiring about the initial sum of money that the construction company ASCON Ltd, initially paid as damages to the Seychelles government, which was disbursed to the residents in 2013.

According to the Ministry of Finance, ASCON Ltd had initially paid the government $7 million as compensation payment and each household received $18,000 in damages.

William said the residents wanted an urgent meeting with the minister for Finance and the Attorney General, to air their grievances.

“In the name of democracy, order and peace I call on our assembly to intervene and convey the seriousness of this request to the authorities concerned,” said William.

Around 1,400 inhabitants from La Misere and Petit Barbarons in the western parts of Mahe, including those working in La Misere were affected by the water pollution.

In the National Assembly, Minister Maurice Loustau-Lalanne said payments will be effected in January 2020 and will be done in phases until 2022.

Loustau-Lalanne explained that from documents received by his Ministry from the Office of the Attorney General, individuals will receive either $1,100, $1800 or $3600.

According to him, the cost will be borne by the government since, in its contract with ASCON, the Minister for Finance had a strict condition, which cleared ASCON of any further compensation payment.

The incident in 2010 occurred following an accident at the sewage plant which allowed diesel and raw effluent to seep into local water sources.

Sheikh Khalifa bought the ex-US satellite tracking station for $395,000 in 2005. Loustau-Lalanne said that $8.5 million has been Abu Dhabi court to replace the entire piping system on the affected mountainside.