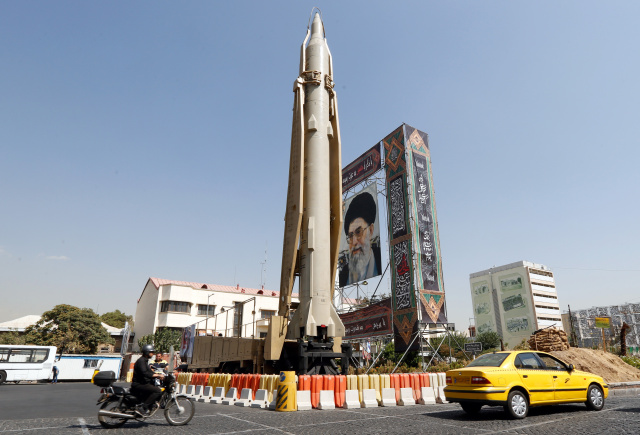 A Shahab-3 surface-to-surface missile is pictured on display in a street exhibition by Iran's army and paramilitary Revolutionary Guard celebrating " Defence Week" marking the 39th anniversary of the start of 1980-88 Iran-Iraq war, at the Baharestan Square in Tehran, on September 26 2019. (STR / AFP)

US Secretary of State Mike Pompeo said Wednesday the actions against Chinese entities were in response to violations of unilateral US sanctions over buying Iranian oil.

Mousavi also slammed US sanctions against Russian entities allegedly involved in Syria, and called on the world to stand up against US "bullying".

Three individuals, five shipping vessels and a Moscow-based front company were sanctioned over an operation to move money and fuel to Russian forces supporting the government of Syria's President Bashar al-Assad, the US Treasury announced Thursday.

Iran and Russia have supported Assad during Syria's eight-year conflict.

UNSC resolution 2231 endorsed the 2015 nuclear deal which provided Iran with sanctions relief in exchange for limiting its nuclear programme.

Tehran and Washington have been at loggerheads since May last year when Trump abandoned the nuclear accord and subsequently began reimposing sanctions on Iran in a stated campaign of "maximum pressure".

General » Be a reporter: Write and send your article » Subscribe for news alert
Tags: Iran, US, China, Russia, diplomacy, sanction