French queue to remember Chirac ahead of national mourning 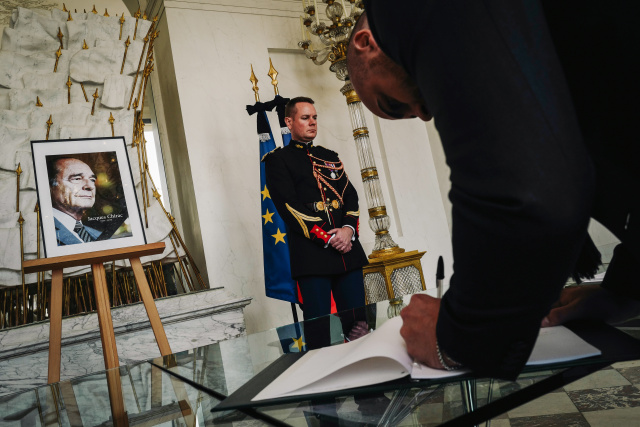 A man signs a condolence register for late former French President Jacques Chirac at the Elysee presidential palace in Paris on September 28, 2019. Former French president Jacques Chirac died on September 26 at the age of 86 after a long battle with deteriorating health, prompting tributes from across the political spectrum for a charismatic statesman who famously said "non" to the 2003 Iraq war. The centre-right Chirac, acknowledged even by foes as a canny political fighter, rose to prominence as mayor of Paris before becoming prime minister and then serving as head of state from 1995 to 2007. (LUCAS BARIOULET / AFP)

(AFP) - Mourners gathered at the Elysee Palace in Paris on Friday to pay their respects to former president Jacques Chirac, whose death unleashed a flood of tributes to a charismatic but complex giant of French politics.

Chirac, president from 1995 to 2007, died on Thursday aged 86 after years of deteriorating health since suffering a stroke in 2005.

Ahead of a national day of mourning announced for Monday, the French presidency threw open the doors of the Elysee Palace for people wanting to sign a book of condolences.

"I express my admiration and tenderness for the last of the great presidents," read one tribute. "Thank you for fighting, thank you for this freedom and good spirits."

In a televised address Thursday night, President Emmanuel Macron praised "a man whom we loved as much as he loved us".

Chirac is also to be given the honour of a public memorial ceremony on Sunday as well as a mass on Monday, which will be attended by Macron and foreign dignitaries including German President Frank-Walter Steinmeier and EU Commission president Jean-Claude Juncker.

A minute of silence will also be observed Monday at public institutions, schools and football matches.

Schools have also been urged to dedicate class time on Monday "to evoke the former head of state's memory," with the education ministry saying it will propose potential discussion themes for teachers.

And the Quai Branly museum of indigenous art founded by Chirac, who had a deep appreciation of Asian cultures, said it would offer free admission until October 11.

French newspapers splashed his portrait across their front pages and dedicated most of their editions to the former president's life -- Le Parisien had an exhaustive 35 pages plus a 12-page special insert.

Even Chirac's opponents hailed his charm and qualities as a political fighter, as well as how he stood up to Washington in 2003 by opposing the Iraq war.

He was also lauded for acknowledging France's responsibility for the wartime deportation of Jews, slashing road deaths with the introduction of speed cameras, and standing up to the increasingly popular far-right under Jean-Marie Le Pen.

But some questioned how much he had actually achieved during a long period in office -- his career shadowed by a graft conviction while mayor of Paris, from 1977 to 1995.

He contested the ruling but did not appeal it, saying the French people "know who I am: an honest man" who worked only for "the grandeur of France and for peace."

And it hardly dented the popularity of the beer and saucisse-loving charmer, whose extramarital affairs were an open secret

He had barely been seen in public in recent years, after suffering a stroke in 2005 and underwent kidney surgery in December 2013.

He will be buried at the Montparnasse cemetery in Paris next to his daughter Laurence, who died in 2016 after a lifelong battle with anorexia.

He is survived by Bernadette, his wife of more than six decades; his daughter Claude, who served as his confidante and adviser; and a grandson, Martin.

The centre-right Chirac succeeded his long-time political rival, the Socialist Francois Mitterrand, in 1995 after two previously unsuccessful bids to secure the Elysee.

"As a leader who was able to represent the nation in its diversity and complexity... president Chirac embodied a certain idea of France," Macron said Thursday.

His death garnered an outpouring of tributes from world leaders, the latest from Chinese President Xi Jinping, who lauded "an old friend of the Chinese people".

Lebanon has also declared a day of mourning Monday, noting the close ties between Chirac and the family of former premier Rafiq Hariri -- whose family provided Chirac and his wife with a sumptuous Paris apartment for several years after he left office.