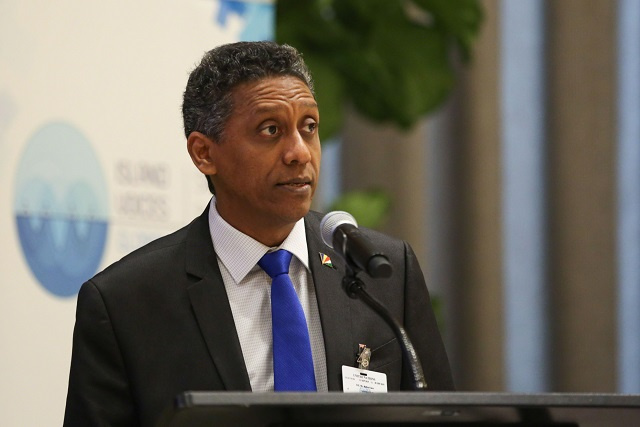 Faure made the statement on Friday at a high-level multi-stakeholder meeting on the sidelines of the 74th United Nations General Assembly. (State House)

(Seychelles News Agency) - Seychelles supports the view that there is a need to strengthen the capacity in developing, monitoring and reviewing durable partnerships for Small Island Developing States, President Danny Faure said at a meeting in New York.

Faure made the statement on Friday at a high-level multi-stakeholder meeting on the sidelines of the 74th United Nations General Assembly (UNGA), State House said in a communique.

The aim of the meeting was to review progress made in addressing the priorities of Small Islands Developing States (SIDS) through the Accelerated Modalities of Action (SAMOA) pathway.

“Some progress has been achieved but we are not satisfied with the slow pace of implementation and with the resources that are made available,” Faure told delegates.

He added that over the next five years “there is a need for increased international support for capacity building, data collection and monitoring and evaluation, to implement the SAMOA Pathway. We share the view that all the priority areas identified in 2014 remain relevant.”

The President of Seychelles, an archipelago in the western Indian Ocean, said that the devastating effect of hurricane Dorian in The Bahamas was evidence that two things urgently needed to happen.

First is for SIDS to be globally and officially recognised as specially classified for official development assistance; and the second is the critical need to invest in building the economic resilience of SIDS, as every dollar spent in resilience saves four dollars in recovery and reconstruction, Faure said.

He also spoke of several initiatives Seychelles has developed in line with international policies and best practice, including the implementation of a user-pay policy, ban on non-re-useable plastic bags, a ban on plastic utensils and straws, and increased waste recycling and waste diversion from landfill sites.

Faure also met with the founder of UK-based BG Research and CEO of Mobino, Jean-François Groff. Discussions centred on how best Seychelles as a Small Island Developing State can take advantage of new technological networks to make the internet more accessible and affordable to Seychellois.

A lifelong entrepreneur, Groff always strives to simplify technical innovations and make them accessible to the general public. He now helps the world transition to digital mobile money, thus accelerating financial inclusion for all.

This being the first preliminary discussion with Seychelles, a fact-finding mission will be initiated to work out the technical details of the application in the island nation's context.

Discussions were also held between the Seychelles' head of state and Tibor Nagy, US Assistant Secretary of State for African Affairs.

Nagy told Faure that the US State Department is looking into the possibility of making regular consular visits to Seychelles to process visa requests from Seychellois wishing to travel to the United States. This would avoid Seychellois having to go to Mauritius to seek a visa.

The discussions also covered strengthening maritime security in Seychelles and the region and training and other cooperation in combating drug trafficking and financial crime.