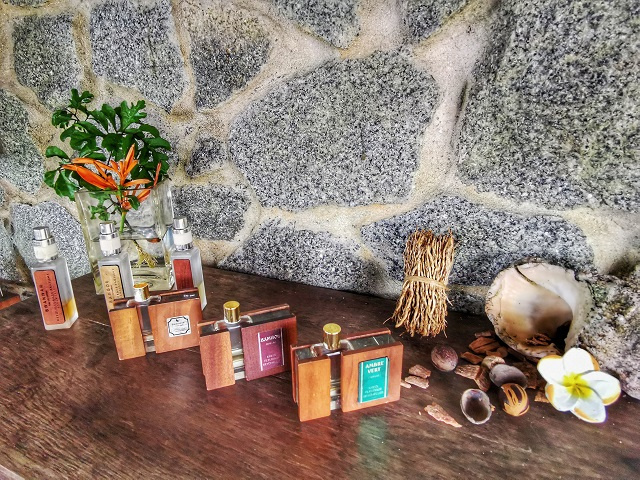 It is part of the brand’s philosophy to remain a small and exclusive perfumery with a limited collection of fragrances. (Kreolfleurage)

(Seychelles News Agency) - To celebrate 30 years of productions, a local perfumery in Seychelles -- North East Point Enterprises -- is getting ready to launch a new perfume under its 'Kreolfleurage' brand, which will surely leave buyers smelling fresh.

Expected to appear on the market in time for the festive seasons, the new perfume has been created by the mother-son duo Dagmar Ehlert and Daniel Hugelmann, who own and run the small company.

“Right now, we do not want to reveal the name of the perfume but what we can say is that it will have a fresh and flowery scent,” said Hugelmann.

Based along the coastal road of North East Point in the north of Seychelles’ main island of Mahe, the perfumery employs only two Seychellois. With the sounds of the waves crashing on the shore mere meters away, the small home-based business attracts quite a lot of tourists.

Since the conception of the company, the targeted market of ‘Kreolfleurage’ were visitors to the island nation.

“Sales are seasonal depending on the number of tourists and this has, until now, been the main market that we target. Now we would like to branch out more on the local market and to achieve this, we have been doing more advertising on Facebook and Instagram, and we are also trying to be present in more local shops,” said Hugelmann.

Founded in 1988, the company released the first two fragrances a year later and gradually introduced two others before the early 2000s. All the scents created are inspired by the multitude of aromatic plants and woods of the region, and each perfume is based on a finely balanced mixture of essential oils.

‘Bwanwar’ and ‘Bambou’ contain a blend of ylang-ylang, nutmeg, and vetiver essential oils, among others, giving them an oriental-exotic and flowery scent respectively. The scent of ‘Ambre Vert’ is described as spicy and ‘Takamaka’ – a discontinued perfume – was crafted for men.

“Perfume is something very personal as it smells different on every skin. ‘Bwanwar’ and ‘Ambre Vert’ are very popular with both men and women. ‘Bamboo’ has a more feminine scent but we have had men buy it for themselves,” explained Hugelmann.

It is part of the brand’s philosophy to remain a small and exclusive perfumery with a limited collection of fragrances.

Hugelmann added that at any giving point in time, the company does not want to have more than four perfumes in its portfolio “because otherwise, our clients will be overwhelmed when they smell our selection, as the human nose will "shut down" and require some time to recover after smelling just a few intense scents.”

The bottle holders, handcrafted from selected local wood such as bois noir, calice du pape, and santol, give each flacon an individual and original touch. The company produces pure perfume and Eau de parfum which costs $36 and $29 respectively.

Aside from the perfumery, the ‘Kreolfleurage’ products can be purchased at the Seychelles International Airport Duty-Free, Pineapple Studios at Barbarons and Baie Lazare, the Banyan Tree Resort at Takamaka and Tanny's Boutique in Victoria.

Apart from Mahe, these are also sold at Otantik de Zil and Kokosye on La Digue, the third most populated island of the archipelago in the western Indian Ocean.

Hugelmann explained that perfume making starts with a recipe. The first batch is made by mixing the essential oils as per the recipe, which then needs to ripen for about 10 to 12 days. Following this, the alcohol is mixed in and the fragrance is left to mature for several weeks. The perfume then goes to a series of filtration and bottled.

“Perfume making requires meticulous work. When designing a perfume, you have to make the first batch and it is only then that you will know if you need to add or remove something which brings you to the second batch. This process continues until you get the product that you want, and hence why designing a perfume can take up to two years,” said Hugelmann.

To complement the perfumery, the owners have introduced a line of assorted souvenirs, gifts, and home décor items, which they sell under the brand name of ‘Monsoon Collection’. ‘Kreolfleurage’ and ‘Monsoon Collection’ are part of the ‘North East Point Enterprises’.