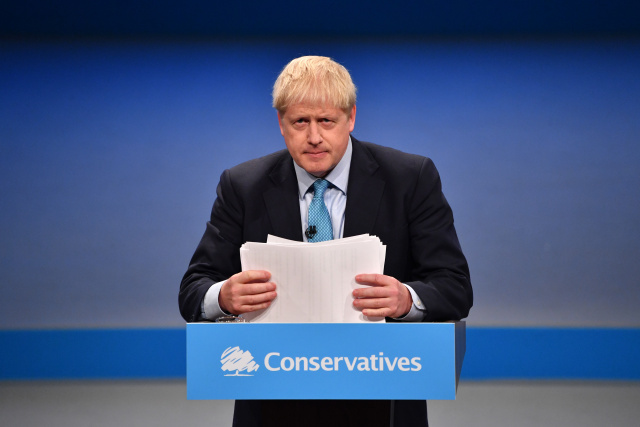 Britain's Prime Minister Boris Johnson shuffles his papers as he delivers his keynote speech to delegates on the final day of the annual Conservative Party conference at the Manchester Central convention complex, in Manchester, north-west England on October 2, 2019. Prime Minister Boris Johnson was set to unveil his plan for a new Brexit deal at his Conservative party conference Wednesday, warning the EU it is that or Britain leaves with no agreement this month. Downing Street said Johnson would give details of a "fair and reasonable compromise" in his closing address to the gathering in Manchester, and would table the plans in Brussels the same day.(Paul ELLIS / AFP)

(AFP) - Prime Minister Boris Johnson will submit "final" proposals for a new Brexit agreement on Wednesday, officials said, warning that if the European Union did not engage with them, Britain would leave the bloc this month with no divorce deal.

Johnson will provide details of what his Downing Street office said was a "fair and reasonable compromise" during his closing speech to his Conservative party's annual conference in Manchester.

But a statement issued late Tuesday stressed this was a "final offer" and Johnson would be keeping his pledge to leave the EU on October 31, with or without a deal.

Johnson himself told The Sun newspaper that he had "10 days" to listen to EU counter-offers and find a compromise.

"If there's a deal to be done, it could be done in that time," said Johnson. "If there isn't, then we'll know. That's the truth."

Johnson, a leading "leave" campaigner in the 2016 EU referendum, took office in July vowing to deliver Brexit at the end of this month in all circumstances.

But like his predecessor Theresa May, he has struggled against a hostile parliament and the complexities of untangling four decades of EU integration.

Johnson has pledged to renegotiate the exit terms May agreed with Brussels, which were rejected by the British parliament three times.

He is now focused on replacing the controversial "backstop", a longstanding sticking point that aims to keep an open border between British Northern Ireland and EU member Ireland after Brexit.

May's proposal would have done this by keeping Britain in an effective customs union with the EU, which critics argued would force London to abide by the bloc's rules indefinitely.

The Daily Telegraph newspaper reported that Johnson instead wants to keep Northern Ireland in the EU's single market until 2025, but in a customs union with the rest of Britain.

This would potentially create two new borders -- regulatory checks between mainland Britain and Northern Ireland along the Irish Sea, and customs checks on the island of Ireland itself.

After that, a new power-sharing authority in Northern Ireland would decide whether to keep the region aligned with EU or UK standards, the newspaper said.

Johnson had earlier denied a media report that he was looking at installing customs posts along the Irish border, amid outrage from Dublin.

The issue is hugely controversial, as the removal of border posts was seen as key to bringing peace to Northern Ireland after three decades of violence over British rule that left thousands dead.

But Johnson said it was a "reality" that there would have to be checks somewhere after Brexit.

Coveney said Ireland could not accept a time limit to any border solution because there was no guarantee that a new and permanent EU-UK trade agreement dealing with the frontier could be reached within a specific timeframe.

European officials were reluctant to dismiss the plan before they had seen the final text, but one exasperated diplomat noted: "If you're saying 'take it or leave it' and you're already leaving', well you can just go."

May twice delayed Brexit as she tried and failed to push her deal through the House of Commons.

Johnson has also faced significant opposition among MPs and lost his wafer-thin Commons majority during a rebellion over his EU strategy earlier this month.

Yet even after being slapped down last week by Britain's Supreme Court for unlawfully trying to suspend parliament, Johnson still insists he will never ask for a delay.

While this tough talk is popular with Conservative members and many Brexit voters, the only clear way to achieve what he wants is to strike a deal in the next two weeks.

Even then, he has to get any deal agreed in parliament, where many MPs are not supportive.

He has riled pro-European MPs with his accusations they are "surrendering" to Brussels, using combative language that critics say fuels division on the issue.

Hardline eurosceptics have warned in turn that they would reject any deal that does not deliver a clean break.