La Digue, the tropical Seychelles island of bicyles is to get road signs for the first time 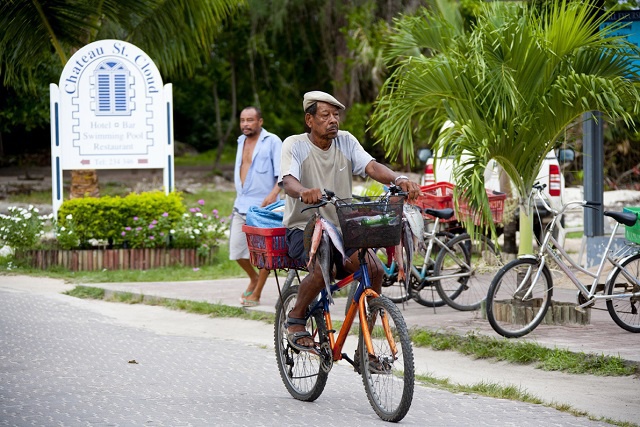 Bicycle is the main mode of transport on the Seychelles third populated island of La Digue (Gerard Larose, STB)

(Seychelles News Agency) - The Seychelles third most populated island of La Digue situated some 45 kilometres from the main island of Mahé, is known for its tranquillity which attracts a good number of tourists visiting the Indian Ocean archipelago.

La Digue boasts one of the most beautiful beaches in the world, Anse Source D’Argent which earlier this year featured in TripAdvisor’s Travelers' Choice awards as one of the Top 25 beaches for 2014.

With an area of 10 square kilometres only, the main mode of transportation used by the islands’ population of about three thousand people and tourists who visit the island are bicycles and its famous ox-carts, as there’s been much effort to keep the island free from traffic congestion and noise.

There are actually only around six registered taxi drivers on the island.

“We in fact have only 47 vehicles, many of which are earth moving machines used on construction sites and are hardly ever on roads. Most people here use bicycles,” the island’s Member of Parliament Chantal Ghislain told SNA recently.

With so few vehicles around the islanders had expressed that they do not want any road signs.

Ghislain told SNA that being one of the most laid back islands of the 115-island archipelago where most people use bicycles, road signs would make it appear like a place with many cars.

The fact that the island has no road signs came to light when a Seychelles Supreme Court judge was giving his ruling on a case involving a road accident between a bicycle and a vehicle on La Digue.

This was after the court went to La Digue on a ‘Locus in quo’ (a latin term meaning ‘the scene of the event’), it was during that visit that the Judge noticed there were no signs where the non-fatal collision occurred.

“I cannot understand why there are no road signs here,” judge Bernadin Renaud, who is based on the archipelago’s main island Mahé had said, before ruling that the girl who was hurt in the accident should be awarded $25,000 in damages.

The Vienna Convention on Road Signs and Signals

Things are set to change to ensure that the island of La Digue complies with international standards.

The Principal Secretary for Transport Patrick Andre has told SNA that the island will have standard road signs by the end of this year.

“They have already been ordered…….the road signs will be set up on La Digue as soon as we receive them,” said Andre.

“We have discussed the issue with the La Digue Board that wanted to have road signs carved out of wood, but we have to respect the Vienna Convention on road signs and all of Seychelles islands are governed by the transport act.”

The setting up of the road signs are in fact timely now that plans are well underway to introduce electric cars on the island.

With only six registered taxi drivers and over 200 tourism establishments, the business owners as well as the islanders had been requesting for alternative transport solutions for a while now.

Recently three models of electric cars that can be used only to transfer a maximum four adults and luggage to and from their hotels were brought to the island for test drives and to get the feedback of the islanders especially the owners of guest houses and small hotel owners on such transportation.

The introduction of electric golf carts on La Digue forms part of a long term plan of phasing out all fuel-dependent vehicles on the island as part of the Seychelles 2020 vision to turn La Digue into the eco-capital of Seychelles.

Thus the road signs will be very important in helping to prevent any accidents.