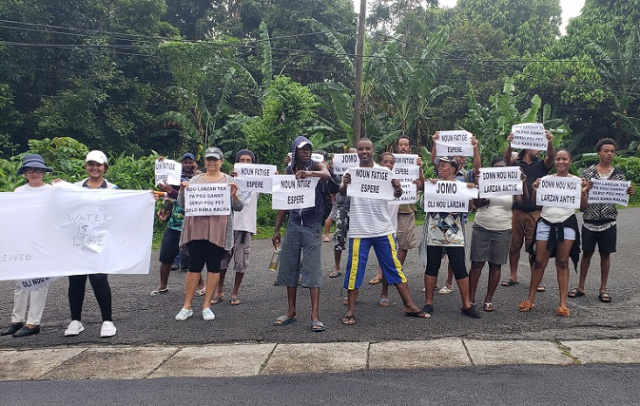 The residents of La Misere initially blocked the entrance of Kennedy Road, which leads to the palace during the protest last Thursday. (Seychelles News Agency)

(Seychelles News Agency) - Members of the Seychelles’ National Assembly (MNAs) have approved the re-opening of negotiations for compensation payments with the construction company and the owner of the building for the victims of the pollution of the waters at La Misere in 2010.

All members voted for an urgent motion brought by Waven William, the MNA of the western Mahe district of Grand Anse, on Thursday.

In his presentation William said, “This assembly asks the government, following the commitment made by the Minister of Finance last Thursday with the victims of the La Misere waters, to give the mandate to the finance minister to renegotiate with the construction company and the owner of the building to get some more money to end rapidly the case of payment of compensation of the pollution from the La Misere waters.”

William added that “the fact that the case has dragged despite the various commitments in the past, I am presenting this motion and asking the support of this assembly for us to send a clear message that the assembly wants to support the minister’s wish when he said that if the authority gave him the mandate to go and renegotiate, he will do so.”

Around 1,400 inhabitants from La Misere and Petit Barbarons in the western parts of Mahe, including those working in La Misere, were affected by the water pollution caused during the construction of Sheikh Khalifa bin Zayed al-Nahyan’s palace complex in 2010.

The Associated Contracting and Consulting Limited (Ascon) -- the company blamed for the pollution -- had agreed in March 2011 for a total payout of SCR99 million ($7.2 million) after over 90 percent of residents from affected homes accepted the SCR250,000 ($18,000) offered to each home. In addition to that, the government had taken its moral responsibility and approached some of its foreign partners to secure funds to pay victims who would not have been paid enough with Ascon’s offer.

The second compensation announced by President Danny Faure last year is to be a top-up on what was initially paid in 2013.

Loustau-Lalanne had told the National Assembly last Wednesday that the $15 million that will be used to settle the second round of compensation claims will be borne by Seychelles' government.

The announcement sparked a protest last Thursday and one of the organisers of the protest, Lydia Jumeau, said the group was against the government footing the bill.

“We don’t want the taxpayer’s money, our money, to be used to pay the compensation. It is another burden on the country. This should be the responsibility of those who caused the pollution in the first place,” said Jumeau.

Elected member of the central district of Les Mamelles, Bernard Georges, who was also on the compensation committee, said the motion will help the government focus on where the money should come from to pay the residents of La Misere, the extra compensation they are seeking.

“It is the construction company and the owner of the building who benefitted and it’s them who must pay any additional compensation. This I believe everyone agrees with. The people of Seychelles through the budget should not be paying for the benefits the owner has made and the negligence of his contractor,” he added.

Georges said that the National Assembly is asking the government to renegotiate instead of footing the bill and that this is the direction a government who is responsible and reasonable should be going.

In his summary, William told residents of La Misere and Petit Barbarons that a public meeting will take place on Saturday at 2 p.m. at the La Misere chapel with the Ministry of Finance and the Attorney General.