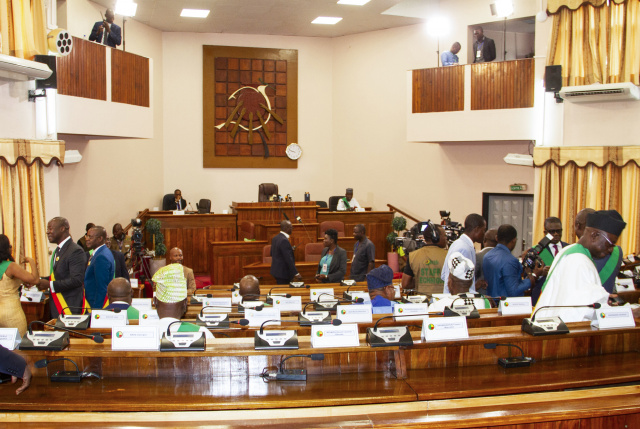 A general view shows Benin's national assembly in Porto Novo on May 16, 2019. Soldiers and police surrounded Benin's parliament, guarding newly elected lawmakers of the West African nation as they were sworn into office following deadly post-election violence. The poll had taken place without any opposition candidate, and all 83 members of parliament come from the only two parties allowed to take part, both allied to President Patrice Talon. (PROSPER DAGNITCHE / AFP)

(AFP) - Benin's President Patrice Talon on Thursday announced a national "dialogue" with opposition parties to calm a political standoff sparked by their exclusion from elections in April.

The one day event -- scheduled for October 10 -- aims to bring together 12 leading political parties "to take part in a political dialogue", the presidency said in a statement.

The president -- a former business magnate -- has been accused of driving his leading challengers into exile with a concerted crackdown on his political foes.

Talon, who made his fortune in cotton, came to power in 2016 on a modernising platform as he vowed to stamp out corruption and mismanagement in the country that has a reputation as one of the region's most stable democracies.

Africa » Be a reporter: Write and send your article » Subscribe for news alert
Tags: Benin, politics