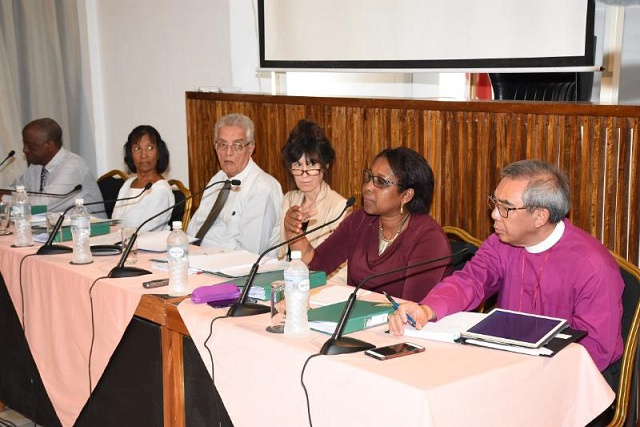 The commission will hear 23 witnesses for 10 days in the second session. (Joena Meme)

The Commission is expected to meet for 10 days and hear 23 cases, twice the number heard in the first session last month. Among the witnesses giving testimony will be a former army personnel and a former chief of police.

Meanwhile, the Commission has confirmed that former President James Michel has declined its invitation to appear as a witness.

Speaking to SNA, the Commission’s chairperson, Gabrielle McIntyre, said three requests were made to former President Michel to appear before the commission in relation to the June 5, 1977 coup d’etat.

McIntyre said the commission wanted to get Michel’s side of the events, specifically in the death of Davidson Chang-Him, who was shot dead at the police headquarters in Victoria. The letter was sent on August 12.

"We wanted to have him to appear as a witness in the shooting. He declined the invitation on the basis that he was not an eyewitness to the shooting of Davidson Chang Him,” she said.

McIntyre added that in two subsequent letters the Commission invited Michel to give evidence about circumstances that led to the shooting and the coup d’etat in general.

“As he was a participant, we thought he would be a perfect person to give us evidence about that. The third letter urged him to come as we thought it was important to the country and to the people that he gives evidence on the coup d’etat and the regime of the day,” added McIntyre.

She told SNA that both letters went unanswered.

The chairperson explained that so far the Commission has not summoned Michel and in the event that it does, he has the right to come but not to answer if he fears whatever he says might incriminate him.

“So we didn’t see much point in forcing him to come. We wanted to say you have a responsibility to come and by not coming you are laying everything at the feet of those people that supported you and that’s unfair,” added McIntyre.

“You were the leader, you should come you should answer and put your side to the story,” she further added.

The Commission says other than the Chang-Him’s case, Michel’s name came up in another case as he was the one who signed the detention orders.

The Commission says it is setting up a Skype system for Seychellois who are living abroad for them to be able to testify before the commission.

Meanwhile, the Commission has confirmed that one of its commissioners - Pierre Rosario Domingue – has resigned. McIntyre says this does not affect the composition of the commission.

The truth and reconciliation process leading towards national unity will be implemented in Seychelles, a group of 115 islands in the western Indian Ocean, over a three-year period.