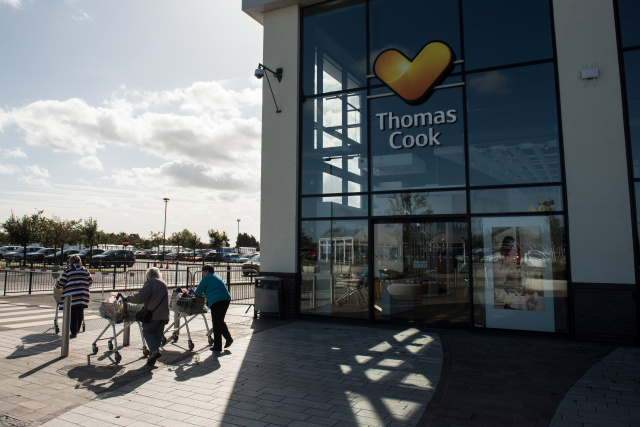 People walk past a closed-down branch of the global travel group Thomas Cook, three days after the company filed for bankruptcy, in Peterborough, central England on September 26, 2019. "Most of us in Peterborough know somebody who works for Thomas Cook," said Phil Dobbs, a human resources manager who works in the city that is home to the collapsed travel firm. The city of Peterborough has rushed this week to help the 1,000 local staff who lost their jobs in the early hours of Monday when Thomas Cook filed for bankruptcy. (OLI SCARFF / AFP)

The final flight arrived at 8.31 am (0731 GMT), touching down at Manchester airport in northern England from Orlando, Florida, said a spokesman for the Civil Aviation Authority (CAA).

The flight, with 392 passengers onboard, marks the end of two-week-long Operation Matterhorn -- Britain's biggest repatriation since World War II.

Matterhorn, which involved 150 aircraft from 50 partners worldwide, "required an extraordinary effort from all involved," CAA chief executive Richard Moriarty said in a statement.

Moriarty paid tribute "to the many amazing former Thomas Cook employees" who helped to make the operation successful.

"It needed an unprecedented team effort from our commercial partners, our friends across government and my colleagues at the CAA," he added.

The regulator on Monday said it would now launch its largest ever customer reimbursement programme under the Air Travel Organiser's Licence (ATOL) scheme.

The scheme is a safety net, based on an EU directive and managed by the CAA, which covers tourists who have bought all-inclusive trips with flights and hotels.

"We know that customers are devastated by the cancellation of their holidays," Moriarty said.

"Those who bought a Thomas Cook ATOL-protected holiday are entitled to a full refund of all the money they have paid towards the cost of their holiday.

"In addition to this, ATOL protected passengers that were abroad when the company went into liquidation might be able to claim for out of pocket expenses."

Debt-plagued Thomas Cook, which struggled against fierce online competition for years and blamed Brexit uncertainty for a drop in bookings, declared bankruptcy on September 23 after failing to secure fresh funds.