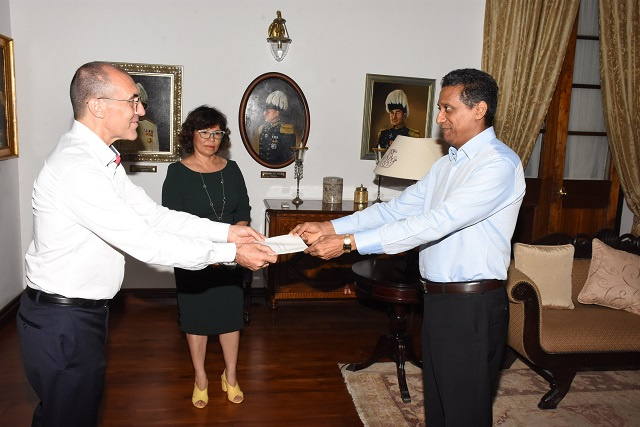 (Seychelles News Agency) - France will continue to support Seychelles in the fight against the impact of climate change, piracy and drug trafficking, said the newly accredited French Ambassador.

Mas told reporters said that the relations between the two countries were excellent and rich and that he would work to strengthen them further.

The areas of cooperation “will reinforce the closeness between Seychelles and France and as I assume my responsibilities it is my desire, my ambition, to become the coordinator of the cooperation networks so that it becomes more efficient,” he said.

Seychelles, a group of 115 islands in the western Indian Ocean, established diplomatic relations with France on June 29, 1976.

Mas said that “Seychelles and France are very close not only because we share maritime borders through neighbouring countries Reunion and Mayotte, but we are also very close because we share common ideas and objectives such as our fight against climate change and protection of the environment.”

According to State House, Faure considers “the competence and the human qualities of the new diplomat as the opening a new era of friendship and enhanced cooperation. A friendship built around the democratic and human values that the two countries share.”

Cooperation between the two countries is expected to pick up when the French national airline -- Air France -- starts direct flights from Paris to Seychelles as of November.

France is currently the second-leading market for visitors to Seychelles. Figures from the National Bureau of Statistics show that up to the middle of September, just shy of 30,000 French nationals have visited the island nation.