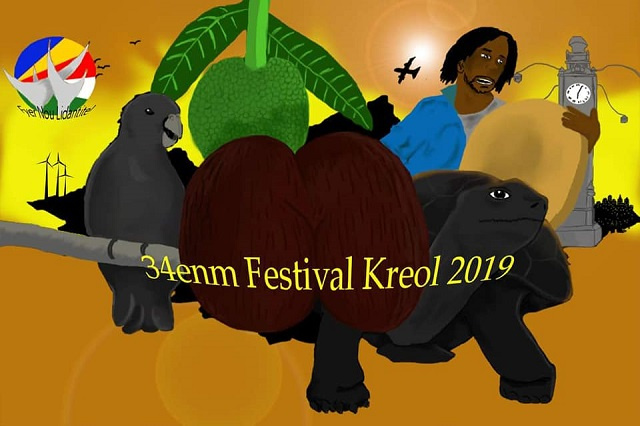 The young student also included the black parrot, the coco de mer and the giant land tortoise – all endemics to Seychelles, 115 islands in the western Indian Ocean - in his creation. (Jennifer Payet) Photo License:

The announcement was made by the Creative Industries and National Events Agency (CINEA) during a press conference on Tuesday called to unveil details of the 34th edition of the Festival Kreol (Creole Festival).

The festival, from October 25-31, is an annual celebration of the island nation’s culture and tradition.

“New on the programme this year is the fact that the fashion show of locally made attires - Fon Lanmal - will be held on La Digue. We thank L’Union Estate which has agreed to host this activity,” said the chief executive of CINEA, Gaelen Bresson.

The fashion event is one where aspiring fashion designers, especially students, can participate. This year a fashion designer from Trinidad and Tobacco will also attend.

The second-most important island, Praslin, will also host a major event in the form of a musical show by Seychellois artist Sonny Morgan, who currently resides in Australia.

“Sonny Morgan is very popular here but he is doing extremely well overseas, where he is selling many albums. Morgan’s show will officially launch the Creole Festival on Praslin,” explained Bresson.

The chief executive explained that this year for the first time CINEA is pushing the brand of the festival.

“We have in the past used the logo ‘fyer nou lidantite’ (proud of our identity) and for this year we are pushing this as the festival’s brand, with different products which will be on sale throughout this month,” explained Bresson.

Bresson said that the song “lasezon kreol in refleri” by local artist Joe Samy has also been adopted as the official hymn of the festival.

The Creole Festival will open officially on Friday, October 25 at the conference center, an event which the organisers promised to be in a traditional setting which in days gone by was created to host important events such as weddings.

As it has been the case every year, other Creole nations including those from the region Mauritius and Reunion will participate. South Africa, Mozambique, Botswana, India, and Korea will also be represented.

'Laserenad' (Serenade), a very important activity on the programme, will take place on Saturday, October 26 starting at the Stadium Carpark in Victoria and ending at the sports complex at Roche Caiman.

All guest countries will be taking part in this parade where the best float will win a prize.

The activities on the programme include the national traditional dance competition, Creole Mass, Creole Sunday on the beach - which this year will be held at Roche Caiman, Creole ball, school creativity show, and Creole quiz.

During the conference, young aspiring artist Dion Payet was announced as this year’s winner of the Creole Festival poster competition.  Payet, 16, is a resident of Praslin.

“I was not expecting to win but very happy I did. Like the logo says an eye on the past, an eye on the future, my poster illustrates just that. I have also incorporated some key landmarks including the clock tower, the bicentennial monument – which shows the continents which our people came from,” explained Payet.

The young student also included the black parrot, the coco de mer and the giant land tortoise – all endemics to Seychelles, 115 islands in the western Indian Ocean - in his creation. For his poster, Payet won $1,100.