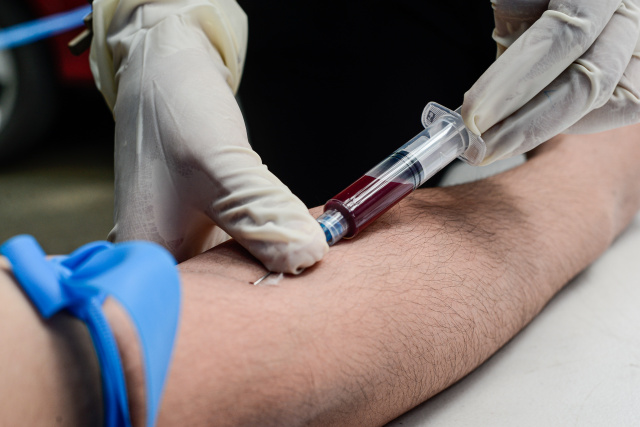 A volunteer medical technologist takes a test blood sample from a student who volunteered for a free HIV testing program, at the State University in Manila on September 13, 2019. (Maria TAN / AFP)

(AFP) - French President Emmanuel Macron urged donor nations Thursday to replenish the Global Fund to Fight AIDS, Tuberculosis and Malaria, warning that gains made in rolling back the killer diseases risked being reversed due to donor fatigue.

The UN objective of ending epidemics of the three ailments by 2030 remained within reach, he told a two-day donor meeting in the city of Lyon, if countries stepped up to the plate with a sum of $14-billion.

But with the conference due to wind up Thursday afternoon, the French president indicated there was a race against the clock to reach the target. Based on pledges so far "we are not there", Macron told delegates.

"The funds that are being asked of us are not... charity. It is a decision to invest against injustice," said the president, highlighting the disproportionate rate of infection and deaths from AIDS, TB and malaria in poor countries, and among women and girls.

"What we want to do is to make AIDS, tuberculosis and malaria disappear from the face of the Earth," he added to applause, and announced that France, the fund's number-two donor, will boost its own contribution by 15 percent.

He complained that resolve has weakened in many rich donor countries given that fewer people there are dying of the three diseases and that treatment, particularly for HIV, was readily available.

But they remained rampant in the developing world. "There is a risk of slackening," he said.

According to the UN's World Health Organization, 770,000 people died of HIV-related causes last year. Tuberculosis, a high risk for HIV-positive people, claimed some 1.7 million lives in 2017, and malaria more than 430,000.

The meeting is the sixth to replenish the fund since it was set up in 2002, with prominent supporters including Microsoft founder Bill Gates and U2 lead singer Bono in attendance alongside a number of African heads of state.

But officials said collecting such a large sum could prove challenging, especially as global attention moves from AIDS towards fighting climate change.

Anything more than the $12.2 billion pledged at the fund's last meeting three years ago in Montreal "will be considered a success", said an official in the French presidency.

Macron, however, insisted Thursday that $14 billion "is the minimum", and warned: "I will not allow anyone to leave this room, nor Lyon, until the $14 billion has been obtained."

NGOs insist even more is needed -- as much as $18 billion.

Peter Sands, executive director of the Fund, warned delegates on Wednesday that the world was at a crossroads: "Do we step up or do we slip back against adversaries as formidable as HIV, TB and malaria? There is no middle ground. We're either winning or losing."

The US is the number one donor with a $4.68 billion contribution to this replenishment voted by Congress.

The Fund is seeking $1 billion of the total from the business world.

"No amount less than $14 billion will be acceptable," the AIDES and Coalition PLUS NGOs said in a statement, which had urged France to ramp up its contribution by a quarter.

"We are here to remember that behind this financial bargaining there are human lives," said AIDES president Aurelien Beaucamp.

The Global Fund groups states, NGOs and private firms to support public health programmes around the world, investing about $4 billion every year.

It says it has helped save 32 million lives and provided prevention, treatment and care services to hundreds of millions of people, while the yearly number of deaths caused by AIDS, TB and malaria has been slashed by 40 percent since 2002 in countries where the Fund invests.