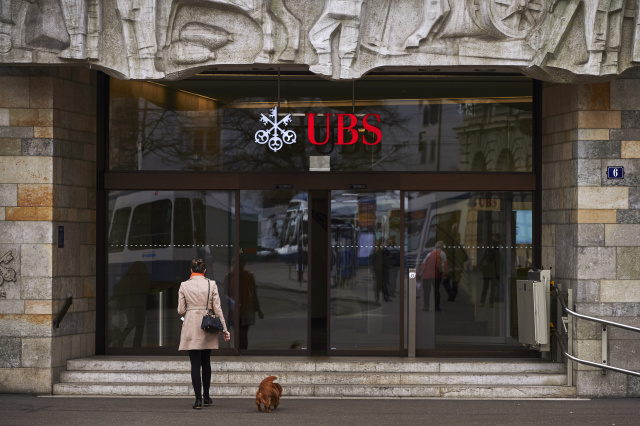 A woman walks a dog past a logo of Swiss bank UBS on a building on Paradeplatz in Zurich on February 2, 2016. Swiss banking giant UBS on February 2 posted a 79-percent higher net profit for 2015, beating analyst expectations, with tax benefits offsetting a difficult fourth quarter hit by market turmoil. (Michael Buholzer / AFP)

(AFP) - The EU removed Switzerland and the United Arab Emirates from its list of tax havens on Thursday, giving two global hubs for multinational tax schemes the all clear.

"Albania, Costa Rica, Mauritius, Serbia and Switzerland have implemented ahead of their deadline all necessary reforms to comply with EU tax good governance principles," the bloc's 28 finance ministers said.

The EU's grey list has included Switzerland since its launch in December 2017 as the country was deemed as having inadequate tax rules, although it had expressed commitment to reform them.

"If Switzerland is off this list, it is a success for me. The best list is the shortest," said Pierre Moscovici, European Commissioner for Economic Affairs, at a press conference in Luxembourg.

Switzerland had approved a tax reform in October 2018, but its entry into force had been delayed due to a referendum.

The United Arab Emirates, which includes Dubai, was also given a clean bill of health, lifted out directly from the blacklist after rushing through reforms.

"Despite recent reforms, both countries will continue to offer sweet treats to tax-dodging companies, like very low tax rates, accelerating the race to the bottom on corporate taxation."

The move leaves only nine countries or territories considered to be uncooperative on the list: American Samoa, Belize, Fiji, Guam, Oman, Samoa, Trinidad and Tobago, the United States Virgin Islands and Vanuatu.

The 28 EU finance ministers drew up the lists -- that followed several scandals including Panama Papers and LuxLeaks -- in the hopes of "naming and shaming" countries into better combating tax evasion by multinationals and wealthy individuals.

Blacklisted countries face only limited sanctions, consisting of freezing them out of European aid or development funding.