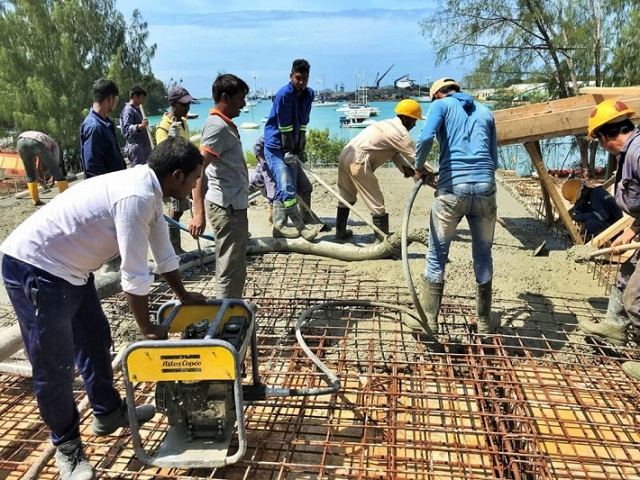 Demand for foreign workers in 2018 was the highest in the construction sector which was 5,562. (Seychelles Nation)

(Seychelles News Agency) - A new policy concerning the recruitment and employment of foreigners in Seychelles is expected to come into force next year, a response to a number of issues the island nation saw concerning foreign workers in the construction and tourism sectors in particular.

Details of the new policy were given by the employment ministry in a session with Members of the National Assembly (MNAs) this week.

Myriam Telemaque, the Minister for Employment, Immigration and Civil Status, told the Members on Wednesday that a proper structure is needed as demand is continuously increasing.

“As our country continues to grow so does the demand for more workers and what is most important is that we have structures in place which will manage this fact well, so that expatriate workers are recruited only when there is a lack so that we preserve the constitutional rights of our people to have a decent job,” she said.

Telemaque gave the latest figures in relation to demand of foreign workers in Seychelles, an archipelago in the western Indian Ocean.

In 2018, there was a demand for 12,835 and this included new applications as well as renewal of contracts. Demand was the highest in the construction sector which was 5,562, followed by the tourism sector with 1,357. Third-highest was in production services at 1,042, followed by commerce 987 and agriculture 769.

“We have also observed that there are particular posts that were occupied by Seychellois before that we are now seeing an increase in demand for foreign workers and these are security workers, drivers, domestic, and waste removal personnel,” she added.

The labour and migration policy has been developed with the help of the International Labour Organisation (ILO) following a study to identify issues which needed to be addressed.

“The country was depending on existing laws and policies such as employment law, immigration decree for guidance on the subject of foreign workers. In 2014, we introduced a guide and the quota system which cover only recruitment and not other aspects. We found it necessary in our development to have a new policy because demands continue to increase,” said the Minister.

The policy is modelled on countries with good practices and has been adapted to fit the Seychelles' context. It focuses on the governance of migrant workers, protecting the rights of workers, development of human resource and recruitment that is fair and effective.

A new element in the policy is that organisations with 25 or more employees have to employ a human resource officer as well as draw up salary structures that are in line with ILO’s concept of ‘equal pay for work of equal value.’

Under the new policy, it is mandatory for employers recruiting foreign workers to register in the Skills Development and My First Job programmes.

Foreign workers will not be allowed to change employment unless they are victims of human trafficking.

Changes will also be in the quota system for the construction sector which will now be a fixed number instead.

The setting up of a new policy has been triggered by various issues regarding the recruitment and employment of foreign workers. A moratorium is in place since October last year for the recruitment of Bangladeshi nationals to work in Seychelles after six Bangladeshi employees of a security firm approached media houses to express their frustration as their employers had failed to pay them their wages.

After the Minister’s presentation, the MNA for the western district Mahe of Grand Anse, Waven William, said “I feel that the amount of information that the minister has given today, is we want to make justice with the subject, this assembly should postpone the debate and get the document so we can have a better debate.”

The speaker of the National Assembly, Nicholas Prea, support this move and confirmed that the debate is postponed until all Members have a chance to look at the documents and that another date is set for the debate.