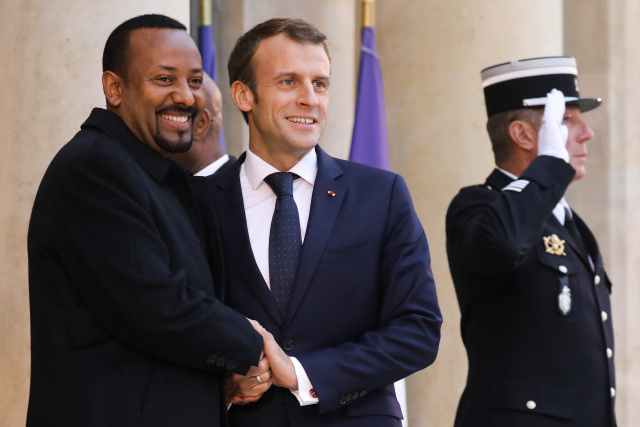 In this file photo taken on October 29, 2018 French president Emmanuel Macron (R) shakes hands with Ethiopian Prime Minister Abiy Ahmed as he welcomes him upon his arrival at the Elysee Palace in Paris. Ethiopian Prime Minister Abiy Ahmed was awarded the Nobel Peace Prize for his efforts to resolve his country's conflict with bitter foe Eritrea, the Nobel Committee announced in Oslo on October 11, 2019. (LUDOVIC MARIN / AFP)

(AFP) - Hailed as a visionary and reformer, Ethiopian Prime Minister Abiy Ahmed won the Nobel Peace Prize on Friday for his efforts to resolve the long-running conflict with neighbouring foe Eritrea.

Abiy was honoured "for his efforts to achieve peace and international cooperation, and in particular for his decisive initiative to resolve the border conflict with neighbouring Eritrea," the Nobel Committee said.

The award is seen as a welcome boost for Abiy as he faces worrying inter-community violence ahead of his country's upcoming parliamentary elections in May 2020.

"We are proud as a nation," his office wrote on Twitter, praising the award as a "timeless testimony to the... ideals of unity, cooperation and mutual co-existence that the Prime Minister has been consistently championing."

Since taking office in April 2018, the 43-year-old has aggressively pursued policies that have the potential to upend his country's society and reshape dynamics beyond its borders, after years of civil unrest.

On July 9, 2018, following a historic meeting in Eritrea's capital Asmara, Abiy and Eritrean President Isaias Afwerki formally ended a 20-year-old stalemate between the countries in the wake of the 1998-2000 border conflict.

Africa's youngest leader has instilled a certain optimism in a region of Africa marred by violence.

"I have said often that winds of hope are blowing ever stronger across Africa. Prime Minister Abiy Ahmed is one of the main reasons why," UN Secretary General Antonio Guterres said upon learning of the Nobel Committee's decision.

The peace agreement with Eritrea has "opened up new opportunities for the region to enjoy security and stability, and Prime Minister Ahmed's leadership has set a wonderful example for others in and beyond Africa looking to overcome resistance from the past and put people first."

The Nobel jury stressed that the Peace Prize was "also meant to recognise all the stakeholders working for peace and reconciliation in Ethiopia and in the East and Northeast African regions."

It singled out Eritrean President Isaias Afwerki for praise, noting that "peace does not arise from the actions of one party alone."

"When Prime Minister Abiy Ahmed reached out his hand, President Afwerki grabbed it, and helped to formalise the peace process between the two countries."

Amnesty International also welcomed the Nobel pick, but said the honour should spur Abiy to enhance reforms on human rights.

"This award should push and motivate him to tackle the outstanding human rights challenges that threaten to reverse the gains made so far," the group said, pointing to "ongoing ethnic tensions that threaten instability and further human rights abuses".

Ethnic violence has been on the rise in recent years, causing Ethiopia to record more internally displaced people last year than any other country.

And last June, Abiy faced the greatest threat yet to his hold on power when gunmen assassinated high-ranking officials including a prominent regional president and the army chief.

Recognising that some would consider the prize premature, the Nobel Committee stressed much was left to be done and said the award should also serve as encouragement.

"The Norwegian Nobel Committee believes it is now that Abiy Ahmed's efforts deserve recognition and need encouragement," it said.

The committee had to choose from more than 300 nominations this year.

Last year, the honour went to Congolese doctor Denis Mukwege and Yazidi campaigner Nadia Murad, for their work in fighting sexual violence in conflicts around the world.

This year's prize will be presented at a ceremony in Oslo on December 10, the anniversary of the 1896 death of prize creator Alfred Nobel, a Swedish philanthropist and scientist.

On Thursday, the Swedish Academy in Stockholm awarded the 2018 Nobel Literature Prize, which it had postponed in the wake of a sexual harassment scandal, to Polish writer Olga Tokarczuk.

The 2019 prize was awarded to Austrian novelist Peter Handke, a choice that has sparked outrage because of his vocal support of Serbs during the bloody collapse of the former Yugoslavia.

Achievements in Medicine, Physics and Chemistry have already been honoured and the Economics Prize will wrap up the 2019 Nobel prize season on October 14.