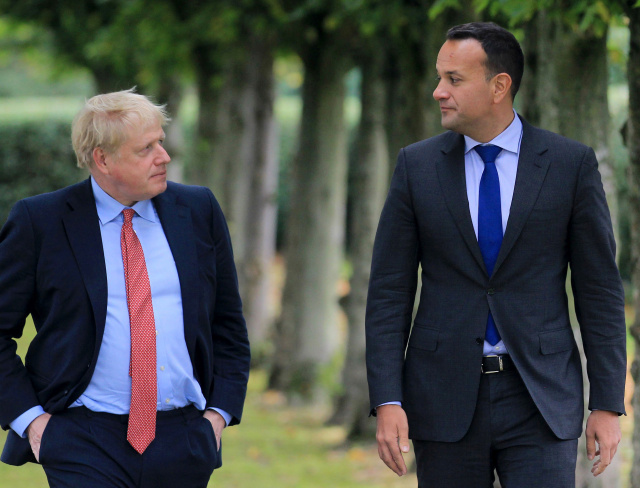 (AFP) - Britain and the European Union on Monday entered a pivotal week that will determine if they are still on course to reach amicable divorce terms -- and when Brexit might finally occur.

Queen Elizabeth II is due to step into the fray by performing her ceremonial duty of informing parliament about the government's agenda for the coming year.

But the odds of Prime Minister Boris Johnson's tenure lasting that long will depend largely on the outcome of hurried closed-door discussions in Brussels around the same time.

EU leaders will then meet on Thursday and Friday for a summit held under the pressures of the October 31 Brexit deadline just two weeks away.

Diplomats see little hope that the sides can achieve in a few days what they had failed to in the more than three years since Britons first voted to leave the bloc after nearly 50 years.

Technical talks -- variously described as "intense" or "constructive" -- are continuing but few familiar with the process can point to progress on the decisive issue of British Northern Ireland's place in the EU customs zone.

Johnson warned his ministers Sunday to brace for a cliff-hanger finish.

The British leader said "a pathway to a deal could be seen but that there is still a significant amount of work to get there and we must remain prepared to leave on October 31".

Johnson took over from his predecessor Theresa May in July on a promise not to extend Brexit for a third time this year -- even if only a few more weeks are needed to get a deal done.

Breaking that pledge could come back to haunt him in an early general election that is widely expected in the coming months.

Johnson is under parliamentary orders to seek an extension until January 31 of next year if no deal emerges by Saturday.

He has insisted he will both follow the law and get Britain out by October 31 -- a contradiction that might end up being settled in court.

Finance minister Sajid Javid said Monday he will announce a first post-Brexit budget on November 6 "to shape the economy for the future".

The main opposition Labour party immediately poured scorn on the plan as "an electioneering stunt", given the Brexit-fueled uncertainty pervading British politics.

"I'm not sure they'll still be in office on 6th November and it doesn't appear to be at all certain that we will leave the EU on the 31st October," she told BBC radio.

"There's a lot of water to flow under the bridge between now and then."

Outgoing EU chief Jean-Claude Juncker said British politics were getting more difficult to decipher than the riddle of an "Egyptian sphinx".

"If the British ask for more time, which they probably will not, it would in my view be a historical nonsense to refuse them," Juncker told Austria's Kurier newspaper.

Something will have to give when the British parliament holds its first emergency Saturday meeting since the 1982 Falklands War.

Johnson could theoretically then try to put up a fight and refuse to sign off on a Brexit extension request. His refusal would immediately be contested in court.

But Brussels might want to push Brexit back further into next year so that it stops interfering with all the other European issues piling up.

A long delay would be untenable for many eurosceptics ahead of a snap election that could come as early as December.

But a short one of a few months might only come on the condition that it is the last.

The last and seemingly least likely outcome would see parliament vote on an actual agreement reached in Brussels against all odds this week.

Brussels insists that the ball is now in Johnson's court.

"If the British government wants a solution, it must move quickly now," a European diplomat told AFP. "The clock is ticking,"