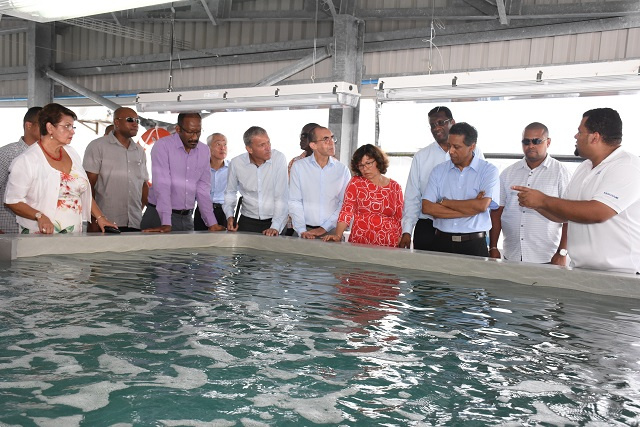 The facility was opened on Monday by President Danny Faure in the presence of the newly accredited EU Ambassador, Vincent Degert. (Seychelles Nation)

(Seychelles News Agency) - The opening of the broodstock, acclimation and quarantine facility at the Providence Fishing Port marks the official opening of aquaculture as an industry in Seychelles.

Managed by the Seychelles Fisheries Authority (SFA), the facility was opened on Monday by President Danny Faure in the presence of the newly accredited EU Ambassador to the island nation – Vincent Degert.

Located in the industrial zone on the east of the main island of Mahe, the facility – the first of its kind on the islands - is funded by the European Union under the fisheries sectoral fund.

“It is to ensure that mature breeding stock, otherwise known as broodstock, are well cared for, can adjust to captive conditions, spawn and produce good numbers of high-quality eggs have fewer disease problems and greater longevity,” explained Aubrey Lesperance, principal aquaculture officer at the authority.

The facility has been designed in alignment with international best-practice standards.

This is the first steps in the government’s effort to launch aquaculture as an industry and diversifying Seychelles' economy without impacting negatively on fisheries and tourism.

In addition, aquaculture aligns with the Blue Economy Strategy of the government of Seychelles – 115 islands in the western Indian Ocean.

“Aquaculture is today one of the fastest-growing global industry, accounting for the supply of 51 percent of all fish consumed in the world. The rise in demand for fish globally means the world is becoming more dependent on aquaculture. Our oceans cannot keep up and aquaculture is the only way that this demand can be met,” said Minister for Fisheries and Agriculture Charles Bastienne.

The 24-hour facility is being manned by a group of eight Seychellois technicians, the majority of whom are graduates of Seychelles Maritime Academy, trained and mentored by the authority.

Groupers, snappers, sea cucumbers and sea urchins are currently being kept at the facility and earmarked for commercial farming.

Two sets of cages are also being set in the sea off the fishing port. These sea cages will house juvenile fishes produced by the broodstock facility. They will be kept there until they reach the required size. The other components of the facility are expected to commence once funds are secured.

The Seychelles Fishing Authority is expected during the course of November to start issuing licenses for five species which will be farmed in this new sector.

During the opening ceremony of the facility, the EU Ambassador– Vincent Derget – commended the good relations and solid partnership between the island nation and the union. Derget highlighted that during the past 35 years, twelve fisheries agreements were signed – all for the betterment of the islands.