Climate change-induced flooding forces seawall in Seychelles to be rebuilt 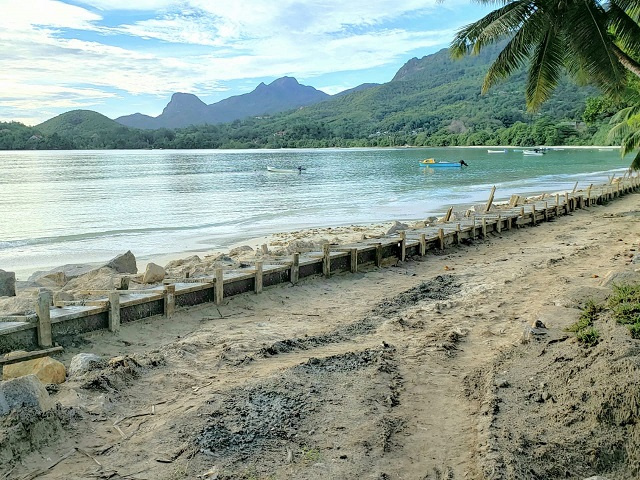 The project will prevent seawater from ending up on the road by restoring the existing, crumbling seawall. (Salifa Karapetyan)

(Seychelles News Agency) - A seawall is being rebuilt in the western district of Anse Boileau to tackle flooding during high tides and heavy rain in the area, an increasing occurrence being blamed on climate change.

The project, which is being implemented in two phases, will prevent seawater from ending up on the road by restoring the existing, crumbling seawall.

The senior climate adaptation officer, Anie Simeon, said the flooding is “due to sea level rises, one of the results of climate change.”

“We are getting these problems because most of our main roads are coastal ones and the more the beach degrades, the more it erodes the areas under the coastal roads. We are predicting that in future we will be getting more cases and our main plan is to increase the distance between the area where the water breaks and the road,” said Simeon.

The climate change division at the Ministry of Environment started getting complaints from district administration offices and inhabitants of Anse Boileau about five years ago.

“The main complaints were that there was coastal erosion in the area and even wave overtopping during times when there were heavy rainfalls and high tides occurring at the same time,” she added.

Coastal rehabilitation in Seychelles, a 115-island archipelago in the western Indian Ocean, is currently being done in different ways including the building of seawalls, rock hammering or timber pilling.

The coastal rehabilitation project is costing the climate change division close to $70,000 and is being carried out by Tirant Excavation. The project started in February but soon after the contractor encountered a problem as there was no base for the seawall. After the project which was redesigned took off again and is expected to be completed by the end of October.

The inhabitants of the district were concerned about the presence of rocks placed on that stretch of beach as the people of Anse Boileau were against rock hammering during the consultation meetings held.

Rocks on the site were used as a base for the seawall, which will later be buried under the sand. The wall is being built at a height that will prevent water from reaching the road during high tide. The sand dune, onto which coconut trees and coco-grass (Cyperus rotundus) are being planted, creates distance between the road and water breaks.

“The dune behind the seawall has been elevated and sand has been placed around trees, the roots of which were exposed. This will ensure that they won't fall over in the future. Planting on the dune is aimed at keeping the sand in place,” said Simeon.

Due to financial constraints, the division is unable to conduct many restoration projects during a given year. At the moment, the team is working on the Anse Boileau project and one at Anse Gaulette, in the district of Baie Lazare.

“The beach close to Lazare Picault had the same problem where water would flood onto the road and all the trees are exposed. It is taking some time to start timber pilling there, as we need to import the woods required plus we need wayleave from the landowners as these beaches are private,” said Simeon.

She explained that though access to the beach is public, the beaches are still on private lands and permissions from owners are required to carry out any development.

Seychelles which is surrounded by a vast stretch of ocean is vulnerable to climate especially the global sea-level rise, which would increase coastal inundation, erosion and magnify the impact of storm surges and affect coastal agriculture.