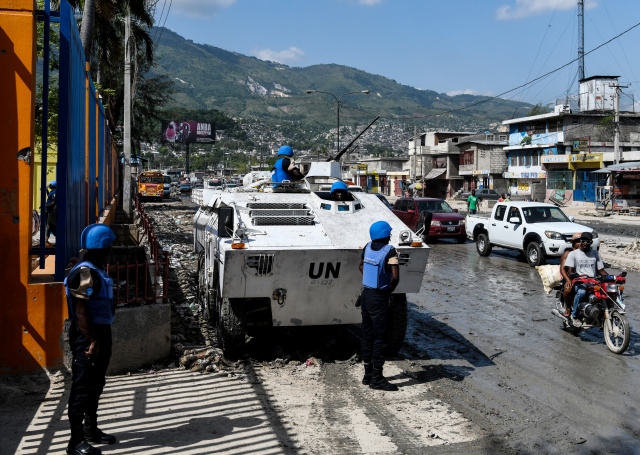 UN Peacekeepers from Senegal patrol gang territory in an armored vehicle in Port-au-Prince, on July 24, 2019. The UN Security Council on June 25, 2019, adopted, draft resolution 2476 creating the "UN Integrated Office in Haiti" (BINUH), a Special Political Mission which will take over from the United Nations Mission for Support for Justice in Haiti (MINUJUSTH) on October 16, 2019. BINUH will consist of some 30 officers, led by a special representative of the UN Secretary-General.(CHANDAN KHANNA / AFP)

(AFP) - The UN Security Council ended 15 years of peacekeeping operations in Haiti on Tuesday, voicing regret that the country is still saddled with huge economic, political and social woes.

The United Nations first sent peacekeepers to Haiti after then-president Jean-Bertrand Aristide was overthrown by the army in 2004 under the pressure of a popular uprising.

In 2017 those soldiers were replaced by a UN police mission whose numbers dropped gradually from 1,300 to 600 and are now to be replaced by a scaled down political mission.

Haiti today remains the poorest country in the Americas, plagued by political instability.

Over the past year, it has sunk deeper into political crisis amid anti-corruption protests demanding President Jovenel Moise's resignation -- which he said on Tuesday he would not do.

"It would be irresponsible of me if today I got up, took out a letter of resignation, signed it and left, leaving the country like that," he said at press conference.

On Tuesday the US ambassador to the UN, Kelly Craft, described Haiti as at a crossroads.

"We urge Haiti's political, economic, and civil society stakeholders to work peacefully to address the most pressing economic and social challenges facing the country," she said.

Craft recalled that the United States is Haiti's main bilateral benefactor, providing $5.2 billion in aid since a devastating earthquake hit the country in 2010.

Since coming to power in February 2017, Moise has faced the anger of an opposition movement that refuses to recognize his victory in an election widely seen as dubious.

Anger mounted in late August due to a national fuel shortage, and protests turned violent.

Haiti has just a caretaker government, and legislative elections that were supposed to be held this month have been postponed indefinitely.

Moise is seeking dialogue with the opposition but the latter has refused so far.

"The protracted multidimensional crisis with which it has been contending since July 2018 shows little sign of abatement or resolution," Guterres wrote.

"I urge all actors to set aside their differences and particular interests to work together to overcome the increasingly preoccupying situation," he added.