Number of China's ultra-wealthy dwindles in 2019 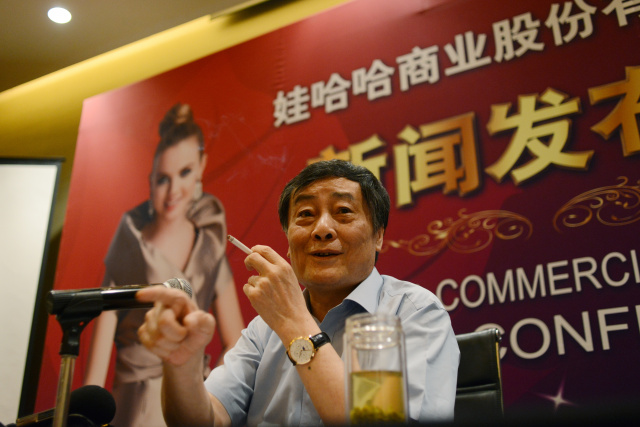 This picture taken on July 17, 2013 shows the president of Chinese food and beverage company Wahaha, Zong Qinghou, attending a press conference in Beijing. Zong, who was previously China's richest person, is now China's second richest person with a wealth of 11 billion USD after Wang Jianlin, head of conglomerate Wanda Group -- a private firm with interests ranging from property to retailing -- who has an estimated wealth of 14 billion USD, according to Forbes magazine on September 10, 2013. (AFP PHOTO / WANG ZHAO)

(AFP) - The number of ultra-wealthy individuals dipped in China this year, a report said Thursday, as the government seeks to rebalance the economy and tackle high levels of toxic debt.

Those listed as the wealthiest -- with holdings worth at least 2 billion yuan ($281 million) -- fell to 1,819 this year, down from 1,893 last year, according to data compiled by the Hurun Report.

"This is the first time in 21 years that the Hurun (China) Rich List has shrunk for two consecutive years," said Hurun Report chairman Rupert Hoogewerf.

"The only other years the list shrunk, and only very slightly, were in 2008 at the time of the global financial crisis and in 2002 after the tech bubble burst."

Traditional sectors such as manufacturing and real estate have suffered as companies "caught up in too much debt" have started shedding assets, affecting their founders' net worth, Hoogewerf added.

"Nearly 40 percent of those in the rich list two years ago has dropped off," he said. "It's part of a very conscious decision by the Chinese government to try and restructure the economy."

Billionaires who made their money in IT, pharmaceuticals and education were replacing the old guard.

Jack Ma, the founder of e-commerce behemoth Alibaba who stepped aside in September, retained the top spot for a second year with $39 billion in personal wealth.

He was closely followed by Pony Ma, chairman and chief executive of Tencent, who has personal wealth of $37 billion.

But real estate tycoon Wang Jianlin -- one of China's richest men, who topped the list in 2017 -- saw his wealth nearly halve to $17 billion.

He is the owner of debt-laden Wanda, which has been forced to carry out a fire sale of its real estate holdings following an overseas spending spree over the last several years.

With a younger generation of entrepreneurs making their way up the rankings, 39-year-old Colin Huang Zheng, of e-commerce site Pinduoduo, became the first self-made entrepreneur born in the 1980s to enter the top 10.

"Nobody in the world has ever made that much from a standing start."

Eleven people born in the 1990s also made the list.

But despite the changing face of the rich list, China's super-wealthy were largely unaffected by a bruising trade war between Beijing and Washington, the study said.

Huawei founder Ren Zhengfei saw his wealth grow 34 percent to $3 billion -- despite his company being blacklisted in the US for alleged Iran sanction violations.

The founder of Starbucks rival Luckin Coffee, Jenny Qian Zhiya, broke into the list with $810 million, after the high-tech chain listed on the Nasdaq in May.

Much of that increase came from the sale of 5.8 million pigs after an outbreak of African swine fever sent pork prices soaring 50 percent in the last year.

China now has 62 billionaires measured in US dollars, and 32 of those have more than $10 billion.