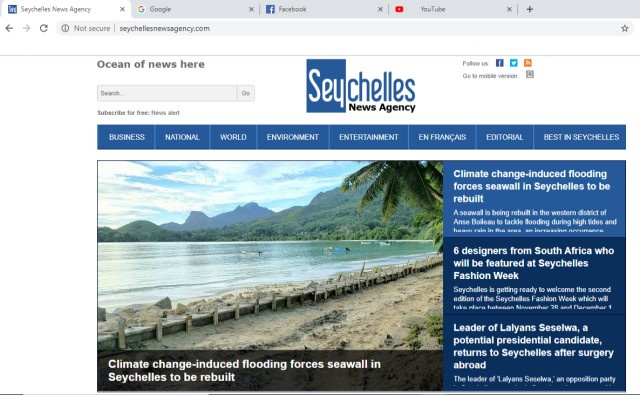 The article in The Guardian’s Business News this month quoted statistics from the World Internet Stats and Seychelles' ranking is based on the number of internet users. (Salifa Karapetyan)

The article in The Guardian’s Business News this month quoted statistics from the World Internet Stats; Seychelles' ranking is based on the number of internet users.

According to World Internet Stats as of December 2017, there were 61,000 Facebook subscribers in Seychelles, a penetration rate of 64 percent.

As of June 2019, there are over 500 million internet users in Africa, but 797 million people in the region are still offline.

Despite the high ranking, the Department of Information, Communications and Technology (DICT) in Seychelles is still pushing for increased connectivity through access to free Wi-Fi.

“The position of the Department is to encourage this since it is a means of increasing connectivity for our citizens, residents, and visitors in the country. It is very much a practice in advanced jurisdictions,” a communique to SNA from the department stated.

Internet service providers, or ISPs, are under no obligation to provide free access, but DICT says it is important to have free internet access in public areas.

“The objective is to increase connectivity for our citizens, residents, and visitors who are on the move within the country. As mentioned before, it is also a common practice that is observed in practically all of the advanced jurisdictions around the world, since more and more services - e-services - are being offered via internet-based platforms,” explained the department.

Currently, there are four internet providers in Seychelles – 115 islands in the western Indian Ocean. They are Intelvision, Airtel, Cable and Wireless and Kokonet. Amongst these, three offers free Wi-Fi access in public spaces.

Established in 2001, Kokonet offers flexible wireless internet hotspot service through its kokozone. The hotspots are at public places including airports, hotels, bars, restaurants, and shopping malls.

The hotspots are located on all three of Seychelles' most-populated islands, Mahe, Praslin, and La Digue.

In operation since 1954, Cable & Wireless Seychelles is the oldest service provider in the island nation and offers Wi-Fi hotspots only at the Pointe Larue International Airport.

The third provider Intelvision offers hotspots on Mahe and Praslin which can be accessed in the capital city of Victoria and at different other locations on the two islands.

The government through DICT also provides free access at the Central Bus Station, at the children’s playground “Paradis Des Enfants” and the National Library in Victoria.

This is also available in the south at the University of Seychelles Campus at Anse Royale as well as in the northern district of Beau Vallon. As for the two other main islands, the service is already available around the district administration offices on these islands.

“It is good that we can have free access to the internet especially for visitors as now everything is online,” Rannus Louange told SNA, “as I work in the tourism industry I know internet access is very important and a must for them.”

Charita Dufresne feels that “free Wi-Fi should be made available in other areas in Victoria. As the majority of people work in town and some of us do not in offices with readily available internet.”

According to Dufresne however, there should have some sort of measure in place to curb abuse.

On its part, the department of Information technology is exploring other options to increase connectivity in public spaces.

Parents, community in Seychelles must guide children on responsible use of technology, expert says