Paintings, books, and a football: Gifts to president of Seychelles in his third year go on display 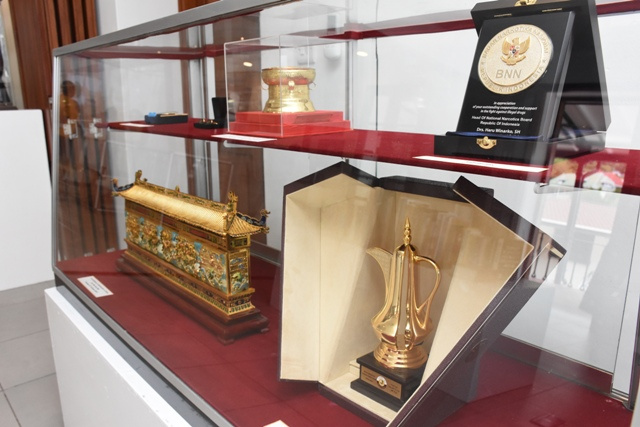 The exhibition has on display gifts obtained during state visits the president made and those from visiting heads of states and dignitaries. (Seychelles Nation)

(Seychelles News Agency) - To mark his third year in office as the president of Seychelles, Danny Faure is showcasing gifts received on behalf of the people of the island nation in an exhibition which opened on Wednesday.

Called the ‘Gifts of State’, the exhibition at the National History Museum in Victoria is an initiative Faure started in 2017.

The exhibition has on display gifts obtained during state visits the president made and those from visiting heads of states and dignitaries. Gifts given by local and international organisations over the past 12 months as well as from individuals can also be seen.

The exhibition holds a collection of over 100 gifts ranging from paintings, books, and replicas of planes to a football and statues. It will be opened for the public between Tuesday and Friday from 9 a.m. to 5 p.m. and on Saturdays from 9 a.m. to 1 p.m. until November 16.

A viewer at the opening of the exhibition, Thereza Dogley, described the initiative as quite nice, “showing the journey of the president for the past year.”

“The most memorable gifts would be those coming from schools he has visited, and it seems that it was the students who made them, showing the creativity of these students,” said Dogley.

Germaine Valentin, another attendee at the opening, said that “there are so many things to see in the exhibition and it is quite impressive to see all these varieties of gifts that the president has received.”

“Among the gifts, I see not only international ones but also quite a few that have local origins. The large painting from China makes me relieve my trip to the country,” Valentin added.

Faure was sworn into office on Sunday, October 16, 2016 to become the Seychelles’ fourth president since the island nation gained independence from Britain in 1976. He succeeded outgoing President James Michel, who resigned.

“One of the original concepts of this annual exhibition was to bring more transparency as to what protocol gifts are received by the Head of State on behalf of the people of Seychelles.  The exhibition also honours and expresses our appreciation to the bearers of those gifts, to celebrate together the ties of friendship and cooperation between us,” said Mohammed Afif, the Secretary of State for Cabinet Affairs.

The curator of the exhibition, Emmanuel D’Offay, said that the ‘gifts of State’ exhibition is one of the “best things that the president could have done when he took office.”

“None of the previous presidents did that and we do not know what they got. At least with this one, each year we see every gift that he has received which is displayed in an exhibition. This is a form of pride for the people to come and view the exhibition because after all, those gifts do not belong to the president but to the people of Seychelles and that is why they are being offered the chance of seeing it,” said D’Offay.

After one month in the exhibition, the gifts will be moved to the ‘Gifts of State’ room in the same museum, replacing the gifts from the previous year.

“We are planning, for the 250th-year anniversary of settlement in Seychelles, to have the whole three years' worth of gifts on display,” added D’Offay.