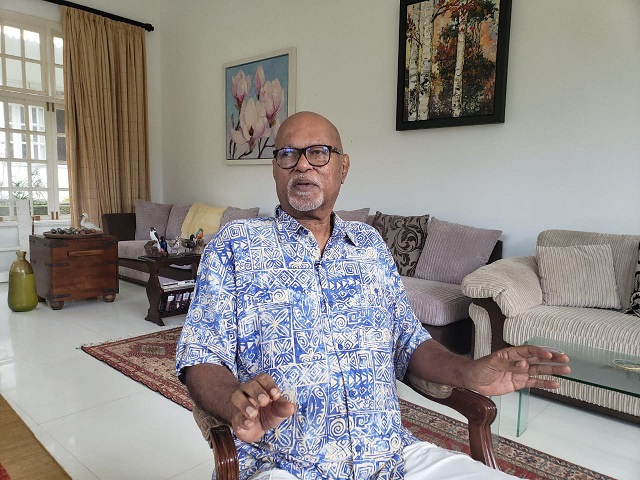 Patrick Pillay is the leader of the Lalyans Seselwa party. (Rassin Vannier)

(Seychelles News Agency) - The leader of ‘Lalyans Seselwa,’ an opposition party in Seychelles, says he is fit and ready to resume his work in politics after undergoing surgery on October 7 in Sri Lanka.

Pillay, who returned to the country on Wednesday morning, said he had to travel to Sri Lanka urgently for the specialised care.

“I was admitted to Hemas Hospital for the surgery to insert a double pacemaker as this procedure cannot be done in Seychelles. Everything went well and I have been given the all-clear by the doctors,” he told SNA.

Concerns over his health arose when a meeting of Lalyans Seselwa scheduled for October 5th for the central region was cancelled, citing Pillay’s urgent trip abroad. Pillay has expressed his party’s intention to contest next year’s presidential election and his desire to stand as the candidate for Lalyans Seselwa.

Pillay reassured his supporters that he was fit to carry out the party’s duties and will resume work as soon as possible.

“I had seven days to recuperate and was kept under observation for two days. My doctors were satisfied with my progress and I’m fighting fit. I am very strong and the surgery means that my condition has improved greatly,” he said.

The meeting will now be held on November 9.

“I am resuming my political activities. We will have our regional meeting to outline our plans and activities for 2020 in early November and we also expect to hold our convention later in the year,” said Pillay.

Pillay, 70, formed Lalyans Seselwa in 2015 to contest the presidential elections. His party later joined the main opposition coalition, Linyon Demokratik Seselwa (LDS), to contest the legislative elections. LDS won the majority of seats -- 19 out of the 33 -- putting Seychelles, an archipelago in the western Indian Ocean, in a position of cohabitation as the legislature and the presidency came from different parties.

He has on numerous occasions refuted rumours about his ill health. In an interview with SNA in May, after he was hospitalised, Pillay called the rumours a ‘whispering campaign’.