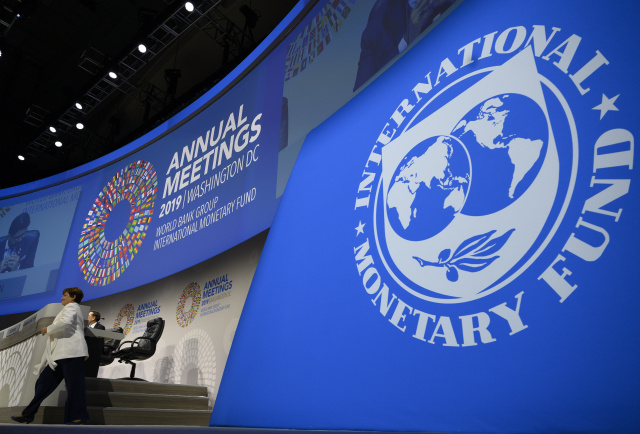 (AFP) - Global finance ministers agreed Friday to double a key pool of money that the International Monetary Fund can use to aid distressed countries but again put off giving more votes to major emerging economies.

The IMF has been working to restructure its voting shares to give more weight to growing economies like China, India and Brazil but some traditional powers have resisted since they stand to lose influence in the institution.

Despite a prior commitment to complete the new voting distribution before now, IMF membership at this week's annual meetings kicked the can down the road, committing instead to revisit the issue at the latest by December 2023, according to a statement on Friday.

However, a new division of voting power "would be expected to result in increases in the quota shares of dynamic economies in line with their relative positions in the world economy," the statement said.

The Washington-based lender, founded in the wake of World War II, has traditionally been controlled by the United States and western European countries.

But major developing economies, which account for a growing share of global GDP, warn that without a shift of the power structure the IMF risks losing legitimacy and the ability to influence economic policies.

But the IMF's governing body did agree to a plan to shore up the crisis lender's resources, doubling to $500 billion a temporary fund provided by 40 of the fund's 189 members, the statement said.

The IMF gets most of its resources through member quotas but since the review was pushed back it will rely on the special fund, known as the New Arrangements to Borrow, to ensure it has sufficient resources to ward off a new crisis.

The NAB was rolled back following the global financial crisis and the current iteration was approved for five years through November 2022.

"I welcome this high-level endorsement, which demonstrates the strong support of our membership for the fund's mission," IMF Managing Director Kristalina Georgieva said.