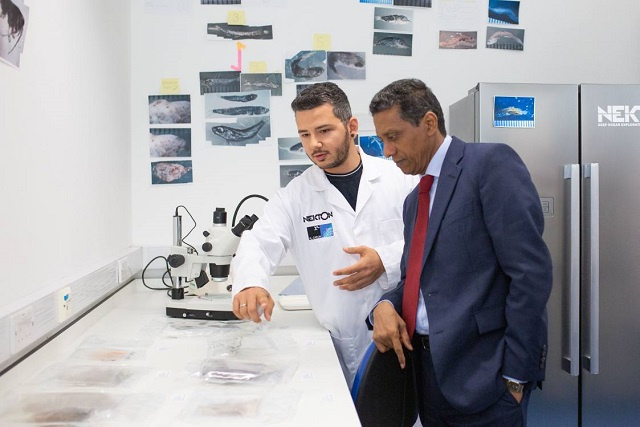 President Faure also visited the Nekton headquarters and was able to examine ongoing research on samples from the expedition in Seychelles' waters. (State House/Facebook)

(Seychelles News Agency) - How can Seychelles further improve its ranking on the Ibrahim Index of African Governance? That was the focus of a meeting between President Danny Faure and a top official of the Mo Ibrahim Foundation.

According to State House, Faure met with Nathalie Delapalme, the executive director of the Foundation on Friday in one among a series of meetings in the United Kingdom as part of his working visit.

Faure was able to assess the consistent improvement in overall governance scores in Seychelles over the last decade and the areas that need to be further strengthened.

The Foundation’s executive director emphasised that only 15 countries have shown increasing progress in this score and that Seychelles is higher than the African average in all categories.

The Mo Ibrahim Foundation was established in 2006 with the sole focus of defining, assessing and enhancing governance and leadership in Africa. It is well-known for its Ibrahim Index of African Governance.

Faure also visited Oxford and met Lindsay Turnbull, an Associate Professor at Oxford and a trustee of the Seychelles Island Foundation (SIF) and a fellow of The Queen’s College.

Students from the Queen’s College together with Seychellois volunteers led an expedition to Aldabra to remove tonnes of plastic litter from its shores earlier this year.

Faure also stopped by the Nekton Headquarters where he met with the CEO of Nekton, Oliver Steeds, and scientists who were part of the expedition to Seychelles, an archipelago in the western Indian Ocean. He was able to examine ongoing research on samples from Seychelles and 3D maps of the islands and met with Seychellois scientist Sheena Talma, currently carrying out research in Oxford.

The President was also invited to deliver a lecture at The University of Oxford, a first for Seychelles.

Faure spoke on the Seychelles’ experience with ocean governance and innovation. Hosted by the African Studies Centre at the University, the President also took part in a Q&A session after the lecture, where the audience was able to ask him a wide range of questions.

From the UK, Seychelles’ President will travel to Sochi for the first-ever Russia-Africa Summit on October 23-24.

The event is the first of this level in the history of Russian-African relations, where heads of all states of the African continent are invited, as well as leaders of major sub-regional associations and organisations.