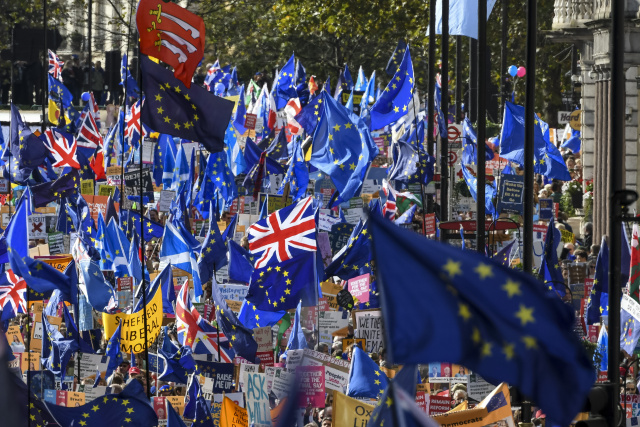 Demonstrators hold placards and EU and Union flags as they take part in a march by the People's Vote organisation in central London on October 19, 2019, calling for a final say in a second referendum on Brexit. Thousands of people march to parliament calling for a "People's Vote", with an option to reverse Brexit as MPs hold a debate on Prime Minister Boris Johnson's Brexit deal.(Niklas HALLE'N / AFP)

(AFP) - The British government has sent European Union leaders a request to postpone the date of its departure from the bloc, the president of the European Council Donald Tusk said Saturday.

"The extension request has just arrived. I will now start consulting EU leaders on how to react," Tusk tweeted, referring to a letter the UK parliament forced Prime Minister Boris Johnson to send.

Johnson insists he does not want to postpone Britain's departure from the European Union beyond the current October 31 Brexit deadline, and says he will not "negotiate" with the Brussels to do so.

But, after he lost a parliamentary vote earlier Saturday, he was compelled by British law to send a letter requesting an extension until January 31, 2020 while parliament works on Brexit legislation.

The decision will come down to the other 27 EU leaders, but it will be Tusk's job as head of the European Council to gather their views and he could call a special summit to approve an extension.

Alternatively, some EU diplomats believe that a decision could be made through diplomatic channels and issued by Brussels. Either way, and EU source told AFP that Tusk's consultations "may take a few days".