Tropeko: A coconut oil from Seychelles that is both tropical and eco 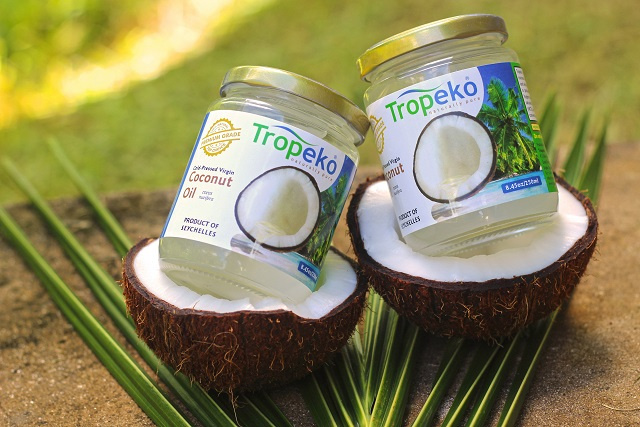 Bristol said, "It would have been unfair not to include coconut and hence why introduced coconut in our line of production." (Tropeko)

(Seychelles News Agency) - A Seychellois entrepreneur is keeping alive the traditional plantation industry through the production of locally made virgin coconut oil.

Moustafa Bristol initially started with cinnamon products for exportation at his distillery located at Grand Anse in the west of Mahe, the main island of the Seychelles’ archipelago in the western Indian Ocean. He then moved on to coconut oil.

SNA met with Bristol to learn more about his latest business venture under the name ‘Tropeko’.

SNA: Tell us a little about ‘Tropeko’ - What is it?

MB: ‘Tropeko’ is a subsidiary brand of Bristol Enterprises Limited and it englobes all that has to do with coconut, and at the moment we are producing one of the best virgin coconut oils on the market. There are other products we want to make very soon under the brand ‘Tropeko’.

SNA: Why did you choose this particular name – ‘Tropeko’ - for the brand?

MB: It was a bit difficult to come up with the name when we were developing the brand. We considered the fact that Seychelles is a tropical country so 'Trop' stands for tropical. This is followed by 'eko' as we are coming with the eco-friendly, organic and natural concept, all of which is represented by 'eko'. To creolise the word eco, we used a K instead of a C.

SNA: Where did the idea come to venture into the production of coconut oil?

MB: Initially our project dealt with cinnamon and later moved to the making of essential oils and after processing it for a while we found that coconut falls in the same category as part of our traditional industries that flourished in the past. We wanted to relive this. It would have been unfair not to include coconut and hence why introduced coconut in our line of production.

SNA: How long did it take to establish the business?

MB: The concept of the business came about in 2000 and a group of five came together to form what was then called Iles D'Abondance Company PTY Limited. This evolved, some partners left us and now I've ended up on my own. I started to do my own thing since 2010 and now it is a family-owned business.

The idea to make coconut-based products came about recently when I started operation on my own. The reason why we are doing this is that we knew that the industry was a traditional one, which at a given point had died out. We wanted to relieve this. That is our main objective; That tomorrow the future generation will see that our cinnamon and coconut industries are still alive.

SNA: What are some of the challenges you faced when setting up the business?

MB: There was the need to do a lot of researches and there were some constraints that we faced at the start. It is a capital-intensive project and financing it is always a challenge when we are trying to get it to where we want to see it. The other constraint is the challenge to get access to raw materials and workers. We are getting coconuts from IDC (Islands Development Company) but there are still some logistic constraints.

The cost of production is another one of our challenges. It costs a lot to produce locally because we need to import a lot of packaging materials. Labour and utility costs are high which translates to a high production cost, which at the end of the day, reflects on the cost of our product.

SNA: Where can the public get the products and at what cost?

MB: We want to make sure that Seychellois can enjoy locally made coconut oil. It is not a secret that coconut oil is the best oil to cook our food with. For the moment it is available on the local market with a few outlets on the international market. We have not yet been able to however sustain demand on the local market. The coconut oils are available in supermarkets such as STC (Seychelles Trading Company), Spar, ISPC some Kannus outlets.

SNA: How is ‘Tropeko’ staying afloat within an ever-growing niche, especially with more imported coconut oil on the shelves at a cheaper cost?

MB: As I have mentioned before, the cost of production is high in Seychelles due to the fact that we need to import most things. However, we know the quality of our product and we know that Seychellois, even if there are imported products, love those that are produced locally.

They have the chance to come see the process of making by coming to our factory. We are using state of the art machinery, making sure that our products are highly hygienic and of high quality for consumption. We know that if we ever get the number of raw materials that we need to run our production effectively, then, of course, it will allow us to get more yield which might allow us to lower our price.

SNA: Which processes are you using to extract coconut oil?

MB: There are different processes to get coconut oil but we are cold-pressing our fresh coconut. We do not use any heat to extract oil and we do not use copra. The oil, in the end, can be used in food preparation, and on the skin.

If we are talking about showcasing our traditional way of producing coconut oil, then we can have the cow and mill. Copra was used during the traditional oil extraction method. For production on a commercial basis that is not the way to go.

SNA: You mentioned that you would like to manufacture more coconut-based products, what will you be coming with in the future?

MB: Other products that we want to come with in the future are flour, vinegar, and butter, all from coconut. There are others that we would like to make but those mentioned are the major ones.  I would like to take the opportunity to announce that we are thinking of listing our company soon on the Seychelles stock exchange.

This is being done for two main reasons - to allow investors, preferably Seychellois to participate in the venture. It is a traditional industry and we want to keep it alive. Secondly, we see that there is a demand and to sustain it, we are expending as a business and we need funding to attain our targets. There are five-star hotels that have approached us so that they can rebrand their spa menu with local products and we already have the basic products.