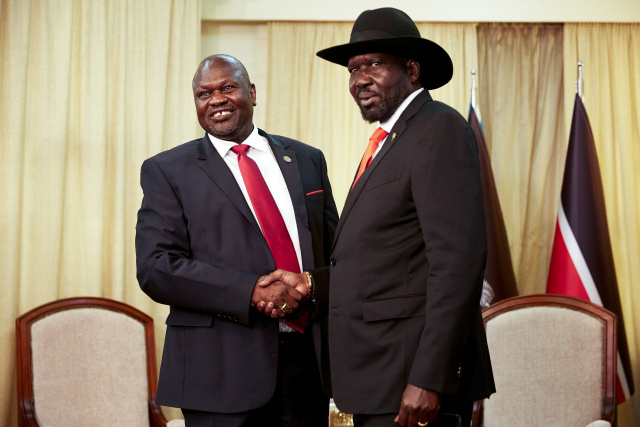 South sudan's ex-vice president and former rebel leader Riek Machar (L) meets with South Sudan's President Salva Kiir at the presidential office in Juba, on October 19, 2019. The 2018 peace agreement that has been delayed by disputes sets November 2019 as the deadline to form a power-sharing government in South Sudan. (Alex McBride / AFP)

(AFP) - South Sudan rebel leader Riek Machar said Sunday that he wants to further postpone the formation of a power-sharing government, warning that rushing into the arrangement would lead to disaster.

Machar, on a rare visit to Juba from exile in Khartoum for talks with his rival President Salva Kiir, met with a delegation from the UN Security Council which is visiting the country just three weeks before the unity government is to be formed on November 12.

The formation of the government has already been delayed once, in May, over crucial issues such as the formation of a unified army made up of rebel and government forces, and disagreements over state boundaries.

Machar warned that if the security issues were not addressed, the country would see a repeat of fighting in 2016, when an earlier peace deal collapsed, forcing him to flee the country on foot under a hail of gunfire, and worsening the conflict.

"Why do you want to repeat the same mistake?" Machar told the Security Council delegation, which is pushing for the government to go ahead, as South Sudan is currently home to the most expensive UN peacekeeping mission in the world.

Under the September 2018 peace deal, fighters from all sides are to be trained and deployed as an 83,000-strong unified army -- a process that has been hampered by delays and lack of funding.

"If we don't have a national army, police, security, how do you form the government? This morning president Kiir and I met the security chiefs and what we have found is that even in three months, we will not achieve that," Machar said.

"We have critical issues that we have to resolve, the security arrangement has to be in place. If we are not there by the 12th when Kiir insists to form the government as he had threatened, don't blame us."

Kelly Craft, the US ambassador to the United Nations, said she was disappointed with Machar's remarks.

"There is an opportunity for the political leaders in South Sudan to make political compromises and move forward to the next phase of the peace process in a credible, transparent and accountable manner," she said.

Other signatories to the peace deal are divided between those who want a further delay and those who want to push forward with the formation of the government.

Lam Akol Ajawin, the leader of another rebel group, the National Democratic Movement, said: "Why don't we give ourselves let's say two months in order to resolve the issues of security arrangement and the number of states rather than form the government that will collapse in two months."

Kiir and Machar are expected to continue talks on Monday.

South Sudan's war, which broke out two years after the country achieved independence in 2011 after a falling out between Kiir and Machar, has left nearly 400,000 dead and displaced nearly four million people.