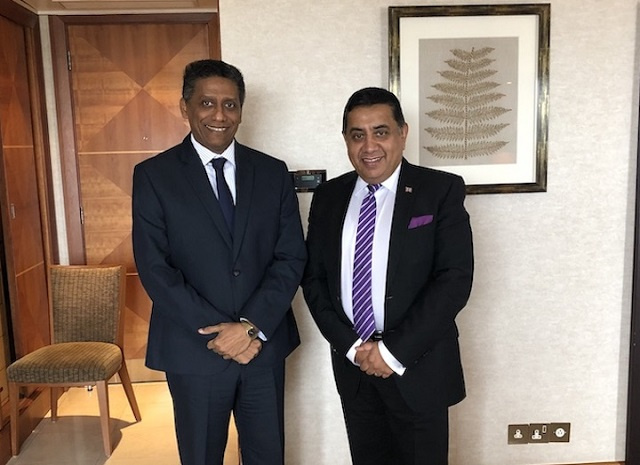 Faure, who is on a working visit in the UK, met with Lord Ahmad of Wimbledon on Monday. (State House)

(Seychelles News Agency) - Coastal management, renewable energy and maritime security are some of the areas that Seychelles could stand to benefit from the United Kingdom following a meeting between President Danny Faure and Lord Ahmad of Wimbledon.

According to State House, Faure, who is on a working visit in the UK, met with Lord Ahmad of Wimbledon on Monday.  Lord Ahmad is responsible for all Foreign and Commonwealth Office business in the House of Lords, and multilateral policy, including the Commonwealth, United Nations and human rights.

Lord Ahmad congratulated Faure on his efforts to rally multilateral action around ocean conservation and climate action and expressed the UK’s commitment to seeing 30 percent of the ocean protected by 2030.

As part of the debt conversion, Seychelles, an archipelago in the western Indian Ocean, is committed to increasing the marine protection area of its ocean from 0.04 percent to 30 percent as a groundbreaking debt refinancing. These first designations -- an area the size of Great Britain -- represents just the first half of the 410,000 square kilometres that will be protected by 2022.

Lord Ahmad also expressed the interest of the UK to push the Commonwealth agenda around issues in environmental conservation, plastic pollution and ocean mapping.

On his side, Faure thanked the British government for its continued assistance and important contribution to the development of Seychelles, an archipelago in the western Indian Ocean.

Faure and Lord Ahmad made a commitment to bolster the strong ties between Seychelles and the UK and build on the partnership represented by the Commonwealth.

After his working visit in the UK, the Seychelles’ President will travel to Sochi for the first-ever Russia-Africa Summit on October 23-24.