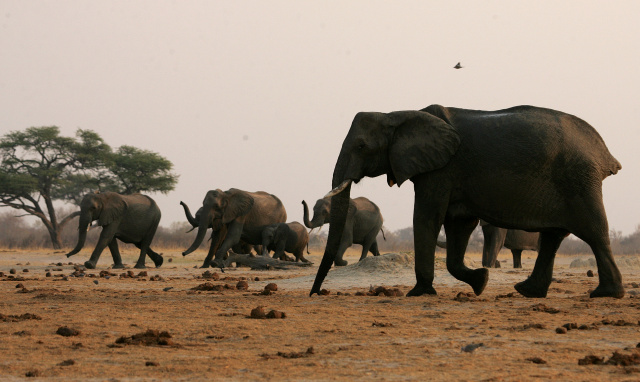 A herd of elephants raise their trunks on their way to a watering pan supplied with water pumped from boreholes powered by more than 45 diesel-powered generators which run continuosly to ensure a steady supply of water for animals in the arid Hwange National Park on September 6, 2012. The action seems to be working, so far this year around 17 elephants have died in the area due to the extreme heat and lack of water which last year lost 77 elephants due to dehydration. Though the water maybe helping to increase the elephant population this has conversely led to the destruction of the environment. (AFP PHOTO/Jekesai Njikizana)

(AFP) - At least 55 elephants have died in a month in Zimbabwe due to a lack of food and water, its wildlife agency said Monday, as the country faces one of the worst droughts in its history.

More than five million rural Zimbabweans -- nearly a third of the population -- are at risk of food shortages before the next harvest in 2020, the United Nations has warned.

The shortages have been caused by the combined effects of an economic downturn and a drought blamed on the El Nino weather cycle.

The impact is being felt at Hwange National Park, Zimbabwe's largest game reserve.

"Since September, we have lost at least 55 elephants in Hwange National Park due to starvation and lack of water,” Zimbabwe National Parks spokesman Tinashe Farawo told AFP.

Farawo said the park was overpopulated and that food and water was scarce "due to drought".

Africa's elephant numbers have dropped from around 415,000 to 111,000 over the past decade, mainly due to poaching for ivory, according to the International Union for Conservation of Nature (IUCN).

But Zimbabwe, like other countries in the southern African region, is struggling with overpopulation.

"The situation is dire. We are desperately waiting for the rains."

An adult elephant drinks 680 litres (180 gallons) of water per day on average and consumes 450 kilogrammes (990 pounds) of food.

Hungry elephants have been breaking out of Zimbabwe's game reserves and raiding human settlements in search for food, posing a threat to surrounding communities.

Farawo said 200 people have died in "human-and-animal conflict" in the past five years, and "at least 7,000 hectares (17,300 acres) of crop have been destroyed by elephants".

The authorities took action earlier this year by selling nearly 100 elephants to China and Dubai for $2.7 million.

Farawo said the money had been allocated to anti-poaching and conservation projects.

Botswana, Namibia, Zambia and Zimbabwe have called for a global ban on elephant ivory trade to be relaxed in order to cull numbers and ease pressure on their territories.