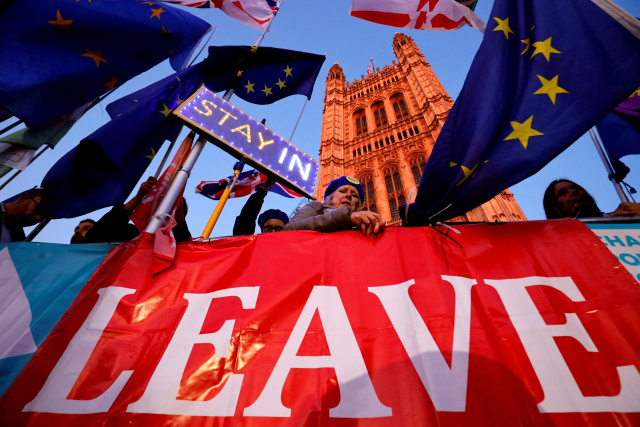 Banners, Union and EU flags are displayed outside the Houses of Parliament in London on October 22, 2019, as MPs debate the second reading of the Government's European Union (Withdrawal Agreement) Bill. British Prime Minister Boris Johnson faces two crucial Brexit votes Tuesday that could decide if he still has a reasonable shot at securing his EU divorce by next week's deadline. The UK is entering a cliffhanger finale to a drama that has divided families and embittered politics ever since voters backed a split from Britain's 27 EU allies and trading partners in 2016. (Tolga Akmen / AFP)

Tusk said he would advise the bloc's 27 other member states to accept a postponement request from the UK government, which Johnson was forced to submit Saturday under British law after he had failed to win lawmakers' backing for his new agreement.

However, earlier on Tuesday MPs gave their initial approval to legislation enacting the agreement struck with Brussels last week -- only to then block the British premier's timetable to pass it ahead of the latest October 31 date for Brexit.

Johnson immediately announced he would pause the process of trying to ratify the text -- the first that MPs have backed since the 2016 referendum -- while he consulted European Union leaders on a possible delay.

"Following Prime Minister Boris Johnson's decision to pause the process of ratification of the Withdrawal Agreement, and in order to avoid a no-deal Brexit, I will recommend the EU27 accept the UK request for an extension," Tusk said in a tweet.

France's European Affairs Minister Amelie de Montchalin said Paris was open to a "technical" Brexit extension of "several days" but ruled out reopening discussions to renegotiate the deal reached by the two sides.

Johnson won a significant victory when the House of Commons voted by 329 to 299 to approve in principal a bill that implements his Brexit deal.

But just minutes later, MPs rejected by 322 to 308 his timetable motion demanding they push through the bill in three days to allow Britain's departure at the end of this month.

Johnson reiterated his desire to stick to the October 31 date and said Britain would step up preparations in case of a disorderly "no deal" exit.

Ratifying the bill before October 31 would have allowed him to avoid a legally-mandated delay, which was set provisionally at three months but is open for EU leaders to amend.

With speedy ratification now in doubt, a postponement seems inevitable.

"I will speak to EU member states about their intentions," Johnson told MPs.

"Until we have reached a decision I will say, we will pause this legislation.

"Let me be clear -- our policy remains that we should not delay, that we should leave the European Union on October 31. That is what I will say to the EU."

Ahead of the vote, Johnson warned he would seek an election to break the political deadlock, although this requires the support of the Labour party.

Johnson, a leading Brexit campaigner in the 2016 EU referendum, took office in July promising to deliver on the result come what may.

He defied expectations in striking a new divorce deal at a Brussels summit last month, and despite Saturday's setback, has now shown he has the numbers to get it through parliament.

But to stick to his Brexit deadline he needs to get the deal through in the next week -- and has no majority in the 650-seat House of Commons.

Opposition parties, many of whom dislike his divorce deal, said it was "ludicrous" to expect proper scrutiny of the legislation in less than three days.

Labour leader Jeremy Corbyn, who has called for a second referendum on Brexit, said Johnson was trying to "blindside" MPs into supporting a "rotten bill".

The Democratic Unionist Party, Johnson's Northern Irish allies, accused him of duping them about new trading arrangements for the province.

The timetable motion was intended to ensure the House of Commons debated the bill quickly, allowing it to go onto the unelected upper House of Lords.

Johnson warned that seeking further time risked a "no-deal" exit if the EU refused a delay.

Businesses and markets on both sides of the Channel fear such a scenario, where Britain severs ties with its closest trading partner with no new plans in place after 46 years of integration.

The deal covers EU citizens' rights, Britain's financial settlements, a post-Brexit transition period until at least the end of 2020 and new trade arrangements for Northern Ireland.

It also sets out vague plans for a loose free trade agreement with the EU after Brexit.

An earlier Brexit text agreed by Johnson's predecessor Theresa May was rejected three times by MPs earlier this year.