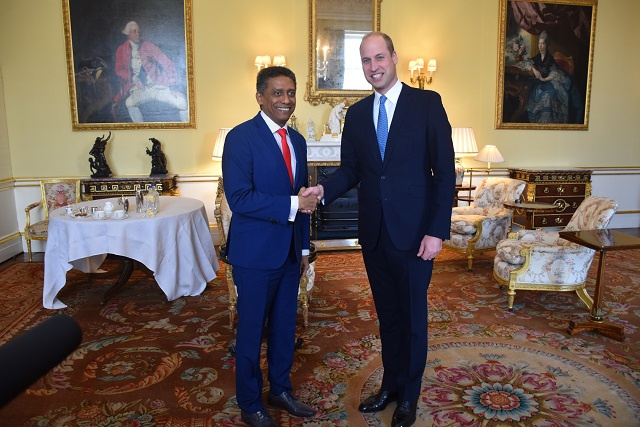 (Seychelles News Agency) - The President of Seychelles, Danny Faure, shared the progress the island nation has made in ocean governance and marine protection in a meeting with Prince William, the Duke of Cambridge.

Faure, who was on a working visit to the United Kingdom, met with Prince William at Buckingham Palace on Tuesday morning, State House said.

The Duke of Cambridge was particularly keen to hear more about the Nekton expedition and ongoing research by the scientists, following the exploration in the Seychelles’ waters in March, State House said.

Nekton’s Ocean Zephyr -- the expedition ship which is a floating research station – set sail on March 4 to explore the depths of up to 500 metres of Seychelles' waters for two months.

During the expedition, Faure became the first head of state to deliver a live address from a depth of 124 metres below the ocean surface on a submersible dive on Sunday, April 14.

Prince William shared with the President his passion for environmental protection, and his personal connection to Seychelles given his previous visits. He commended Seychelles for its global leadership in climate action.

The Duke and Duchess of Cambridge honeymooned at North Island, a luxury resort in Seychelles, in May 2011.

Faure also met with Patricia Scotland, the Secretary-General of the Commonwealth on Tuesday.

The Secretary-General commended Seychelles for its leadership across the world and across the Commonwealth in ocean conservation and climate action. She noted how Seychelles continues to set an example to fellow member nations and particularly other Small Island States on how size does not limit innovation.

Baroness Scotland committed the continued support of the Commonwealth Secretariat to the sustainable development aspirations of Seychelles, especially in the areas of capacity building, data management, and accessing green financing.

On his side Faure thanked the Secretary-General for her consistent support and explained that Seychelles would have 30 percent of its Economic Exclusive Zone protected by early next year. He also expressed his gratitude for the assistance the Commonwealth has provided in various fields of cooperation, particularly the Blue Economy and climate finance advisors -- an information portal for disaster relief funds or setting up innovation hubs for young entrepreneurs.

The head of state of Seychelles, an archipelago in the western Indian Ocean, will next travel to Sochi for the Russia-Africa summit on October 23-24.

Faure will return to Seychelles on October 27.