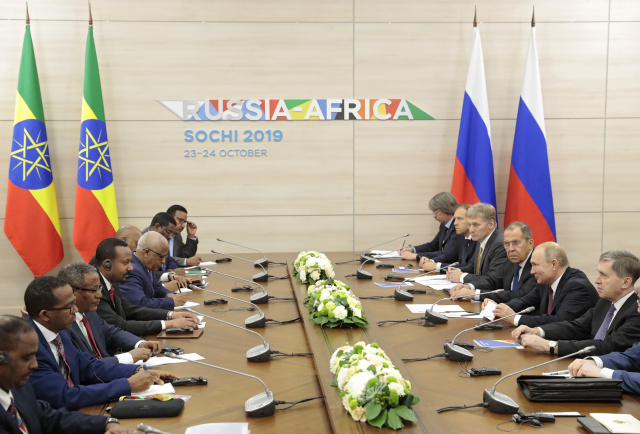 (AFP) - President Vladimir Putin on Wednesday hosted a major summit aimed at reviving Russia's influence in Africa, telling leaders from the continent he would seek to double trade in the coming years.

All 54 African states were represented at the first Russia-Africa Summit in the Black Sea resort of Sochi, with Putin meeting leaders for bilateral talks throughout the day.

Trade between Russia and Africa has more than doubled in the past five years to more than $20 billion, Putin said, adding that some consider this "a good figure".

"I cannot agree," he said. "In Africa there are very many potential partners with good prospects and huge growth potential. Of course, this is not enough."

He said Russia would be looking to "double this trade, at least" within the next four to five years.

Russia had written off more than $20 billion of African debt, Putin said.

Moscow was a crucial player in Africa in the Soviet era, backing independence movements and training a generation of African leaders.

But its ties with Africa declined with the collapse of the Soviet Union in 1991 and in recent years China has emerged as a top foreign power on the continent, forcing Russia to play catch-up.

South African President Cyril Ramaphosa, among the first to meet with Putin at the summit, praised Russia's "whole effort of strengthening its relationship with the African continent".

Ahmed was set to meet Egyptian leader Abdel Fattah al-Sisi on the sidelines of the event to discuss a dam under construction on the Nile River that Cairo fears would cut its vital water share.

"The military asked me to tell you that they are interested in receiving assistance from Russian military advisers," Geingob said in translated remarks.

Putin last year surprised the West by a string of high-profile moves that strengthened Russia's influence in the CAR, an extremely poor but strategic country that has traditionally had close ties to France, the former colonial power.

The two-day event in Sochi will see more than 3,000 delegates prepare deals and discuss topics from nuclear technology to mineral extraction -- though on the sidelines, stands for arms companies dominate.

The summit is in many ways borrowing from China's playbook.

To expand its influence, Beijing in 2000 launched the Forum on China-Africa Cooperation and has poured tens of billions of dollars into the continent.

Russia cannot match China's economic might but, like Beijing, it is prepared to support African leaders with controversial rights records in exchange for access to the continent's riches.

The summit comes a day after Putin hosted Turkish President Recep Tayyip Erdogan for talks on Syria, as Moscow continues to push its influence in the war-torn country and the wider Middle East.

Putin -- who has been in power for the past 20 years -- has only ever visited South Africa in sub-Saharan Africa, preferring to host leaders from the continent in Russia.

Amid a stagnating economy and after five years of Western sanctions, Moscow is looking both for allies and an opportunity to boost growth.

Russia's trade with Africa is less than half that of France with the continent, and 10 times less than that of China.

Only in terms of arms sales does Russia lead the pack in Africa.

To reverse the trend, Putin has promised cooperation without "political or other" interference, at a time when some in Africa are starting to express concern about states' dependence on China.

But Moscow still has some way to go before it can compete with China or the West.

"Russia is not the Soviet Union, it lacks the resources, the ideology and the appeal of its predecessor," said Paul Stronsky of the Carnegie Center in Moscow.