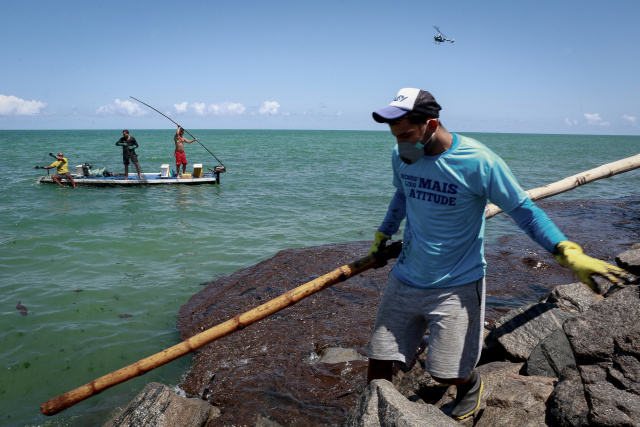 Fishermen help remove crude spilled at Janga beach in Paulista, Pernambuco state, Brazil, on October 23, 2019. Large blobs of oil staining more than 130 beaches in northeastern Brazil began appearing in early September and have now turned up along a 2,000km stretch of the Atlantic coastline. The source of the patches remain a mystery despite President Jair Bolsonaro's assertions they came from outside the country and were possibly the work of criminals. (LEO MALAFAIA / AFP)

(AFP) - Large blots of oil that have turned up on more than 130 Brazilian beaches are "very probably" of Venezuelan origin, Brazil's environment minister said on Wednesday.

The oil began appearing in early September and has been seen along a 2,000-kilometer (1,200-mile) stretch of the northeastern Atlantic coast -- with around 130 tons of oil residue collected by Monday.

"This oil probably came from Venezuela, as a report from Petrobas shows. This oil was found in a foreign ship sailing near the Brazilian coast," Ricardo Salles told a congressional commission.

The minister said the leak, which he called "accidental or not," had been difficult to contain.

Brazil's state-owned oil company Petrobas, which is taking part in the clean-up, said the oil "was neither produced nor sold" by the company after analyzing local samples last week.

The oil has appeared in all nine of Brazil's northeastern states -- a poor region with an economy that depends largely on tourism at its picturesque beaches.

Brazil's President Jair Bolsonaro said Monday that authorities had identified where the oil was coming from, but did not name the country in question.

Brasilia and Caracas have a tenuous relationship, with Brazil calling the socialist regime of its northern neighbor "dictatorial."