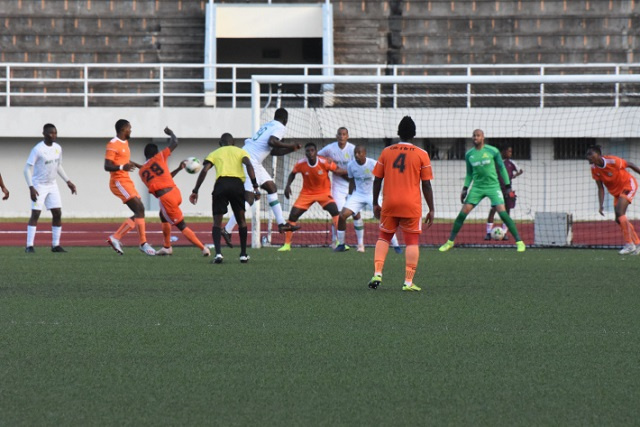 Cote d'Or (Orange) in action against Mamelodi Sundowns in the first round of the Champions League. (Seychelles Nation)

(Seychelles News Agency) - Seychelles Cote d’Or football club will face an Egyptian side on Sunday in the play-off round of the African Confederation Cup.

Cote d’Or will be playing the first leg against Al Masry from Egypt at Stad Linite at 4 p.m. local time.

The manager of Cote d’Or, Andre Bedier, told SNA on Friday that since the team is playing first division league matches no major preparation was done for the match against Al Masry.

“It’s not like the last match we had where we had not yet started the league season and had to prepare specifically for the competition. Things are different now so it’s training as usual,” said Bedier.

The club based on the Seychelles’ second-most populated island of Praslin lost both of the first round matches against South African side Mamelodi Sundown and exited the Champions League 16-1 on aggregate score.

“I think we have learnt our lesson as this was not a result we were expecting. We had not foreseen us losing by 16-1. Our players are now more conscious and prepared as we have already faced a big team from South Africa and Al Masry is also a big team from Egypt. We will go all out for this game,” added the manager.

Cote d’Or has the advantage of playing the first leg on home ground and Bedier is asking fans not to lose confidence in his team.

The play-off round includes 32 teams -- the 16 winners of the Confederation Cup first round and the 16 losers of the Champions League first round.

The winners of the play-off round will advance to the group stage.

So far no teams from Seychelles, a group of 115 islands in the western Indian Ocean, have made it to the final stages of the African club competitions.