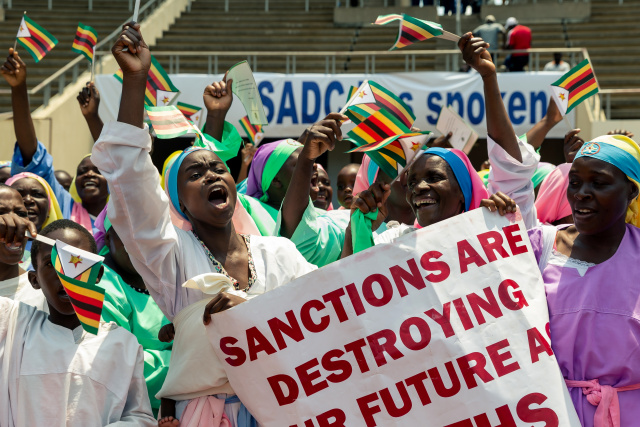 Demonstrators hold placards as they chant slogans and wave Zimbabwe's national flags during a rally to denounce US and EU economic sanctions against Zimbabwe at the National Stadium, in the capital Harare, October 25, 2019. Zimbabweans staged a mass protest on October 25, 2019 against sanctions imposed by the US and the European Union during the despotic rule of late ex-leader Robert Mugabe. President Emmerson Mnangagwa has been battling to re-engage with the West since Mugabe was ousted by the military in November 2017. (Jekesai NJIKIZANA / AFP)

(AFP) - Zimbabweans staged a mass government-orchestrated protest on Friday against sanctions imposed by the US and the European Union during the despotic rule of late leader Robert Mugabe.

President Emmerson Mnangagwa has been battling to re-engage with the West since Mugabe was ousted by the military in November 2017.

His administration organised the demonstration in Zimbabwe's capital Harare, demanding the lifting of sanctions that have weighed down the country for more than two decades.

Thousands of people gathered for the event -- which was declared a national holiday -- waving posters and banners as they marched towards the national sports stadium.

Some rode on top of buses, chanting slogans.

"Sanctions are a crime against humanity," read one banner.

"ZIDERA must go," said another, referring to sanctions imposed by the United States in 2001, at the height of land reforms that saw hundreds of white-owned farms violently seized.

Tensions escalated further when Mugabe kicked out European Union observers and cracked down on opposition party members ahead of a presidential vote in 2002.

The sanctions were aimed at high-ranking officials and government institutions, including travel bans on Mugabe and his inner circle.

US President Donald Trump extended the penalties in March to more than 100 individuals and entities, Mnangagwa included.

On Friday, the president and his wife Auxilia paraded through the streets of Harare, escorted by a brass band.

"We know very well that the sanctions are neither smart nor targeted," he said in an address to the crowds at the stadium.

"Their impact on our daily lives is immeasurable and the consequences are dire."

Information Minister Monica Mutsvangwa told reporters that Zimbabwe had been "ostracised" by investors.

The economy has been in tatters since Mugabe brought in a series of misguided policies that brought a once-thriving agriculture sector to its knees.

Hyperinflation has rendered most goods unaffordable and basics such as fuel and medicine are scarce.

The downturn only worsened under Mnangagwa, who has pledged to revive the economy and attract investment.

But the cash-strapped government still found the resources to bus hundreds of people in from rural areas to take part in Friday's protest.

Public universities were also asked to send 500 students per faculty to march.

At the stadium, participants were each handed a box of chicken and chips.

Zimbabwe's main opposition party stayed away from the march, saying it did not "address the bread and butter issues" affecting the majority of the population.

"The sanctions have proved to be directly affecting entities beyond the so-called targeted individuals," the Southern African Development Community said in a statement.

The group condemned the "trickle-down effects" on the "people of Zimbabwe" and the "region at large".

A handful of anti-sanctions marches were also organised in South Africa, where thousands of Zimbabweans have sought better living prospects.

"We do this because the sanctions on Zimbabwe affect the region and South Africa in particular," said Jacob Khawe, a regional representative of South Africa's ruling African National Congress party.

"Zimbabweans have been converted into homeless people by these sanctions. They run all over the world trying to find survival," Khawe told reporters at a protest outside the US embassy on Friday.

Both the US and the EU have defended their stance.

"The biggest sanctions on Zimbabwe are the limitations it puts on itself," tweeted the US ambassador to Harare, Brian Nichols. "That should be the focus of the government."

The EU said it had only imposed an arms embargo, a travel and asset freeze against Mugabe and his wife, and a ban on doing business with Zimbabwean defence companies.

The US embassy also blasted Zimbabwe's government for corruption and alleged embezzlement.

Mnangagwa has come under fire since January, when at least 17 people were killed and scores wounded after the army brutally broke up a protest against rising fuel prices.