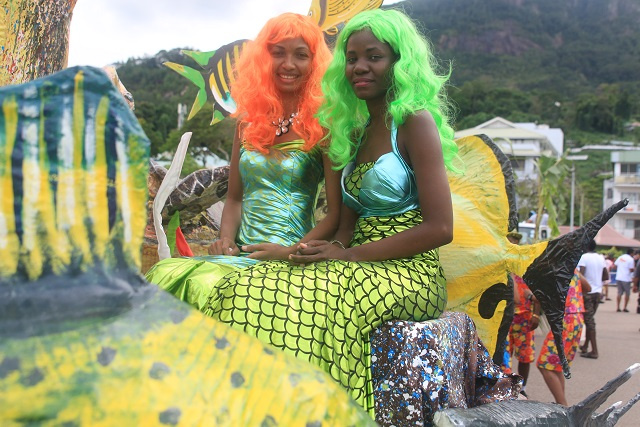 This year the participants were asked to depict the theme “Fyer nou Lidantite. (Joe Laurence)

(Seychelles News Agency) - A large crowd gathered in Seychelles’ capital Victoria on Saturday for this year’s ‘Laserenad,’ one of the main events in the 34th edition of the Creole Festival.

Some 20 local and international groups, dressed in colourful traditional clothes, paraded from the town centre to the central district of Roche Caiman in 'Laserenad'. The event is of the main attractions of the Creole Festival which opened officially on Friday.

Galen Bresson, the chief executive of Creative Industries and National Events Agency (CINEA), which has been in charge of the festival since last year, told SNA that this year the participants were asked to depict the theme “Fyer nou Lidantite”, (Proud of our identity).

He said although three groups dropped out a day before Saturday’s parade, he was generally satisfied with the level and quality of participation.

“Each year there is an improvement in the quality and level of preparation and you can see that everybody goes the extra mile to showcase the theme, put on a good show for the passers-by who come down in droves to watch the display. We are happy with today’s event and the turn-out as well.”

‘Laserenad’ is an activity that has always been present on the programme of activities organised during the annual Creole Festival. It brings together participants ranging from children up to the elderly citizens working together to showcase a chosen theme depicting and promoting the Creole culture.

Other in this year’s edition were Reunion -- an overseas French Department, Mauritius, South Korea, Maldives, Rodrigues and India took part.

As is customary every year, Laserenad has a competitive element with prizes up for grabs and each group had to perform before a panel of juries along the way.

The Mauritian float, participating for the third time, won first prize for the international category.

Head of the group, Joan Lamy, told SNA that this year they chose “Culture and Sega dance” as the theme for the parade. Dressed in national colours – blue, green, red and yellow, which represent the sea, trees, earth and the sun -- Lamy said they wanted to stress on the importance of protecting the environment.

“Being here is a chance to share our culture with other regional islands and also learn from other countries. We also enjoy the competitive component of the parade as it pushes each team to put in more effort into their preparations including the costumes and performance,” said Lamy.

Pirates, slavery, old architecture, traditional dances, environment, oceans were some of the themes on display in the ‘Laserenad’.

“We are showing an old house and a more modern one, the difference between the poor and the rich and that despite this, they can live together in harmony,” Thomas told SNA.

On the school categories, the winners were Baie Lazare Primary school and Seychelles Institute of Teacher Education for post-secondary.

The parade once again attracted a large crowd of both locals and foreigners. A French couple, Isabelle and Bruno Menard, are in Seychelles for their 10th  wedding anniversary and said they were glad it coincided with the Creole festival.

“We didn’t expect to witness such a magnificent show and we are happy to be here and experience the Seychellois culture,” they told SNA.

For Ana and Howard Whalley, this is the second Laserenad they attended since moving to the Seychelles, an archipelago in the western Indian Ocean, three years ago.

“It is good to see so many foreigners as participants in the Creole festival and visitors alike. However, we expected to see more local involvement. We think this is lacking,” the couple said.

Seychellois Cobby Francois told SNA that the parade was impressive.

“It’s really nice to see and learn about our history and I’m really enjoying myself. The participants have really outdone themselves,” said Francois told.

CINEA’s CEO, Bresson, said the Creole Festival is the biggest event in his portfolio and seeing people come down in droves to participate in the events is in itself satisfying.

“We will always have a group who’ll be complaining each year but my team and I are happy and satisfied that we can have activities that celebrate our history and culture and bring joy into people’s lives,” said Bresson.

The Creole festival was officially launched on Friday by the Designated Minister, Macsuzy Mondon. The Festival is an annual celebration of culture and tradition that takes place throughout the month of October and this year.