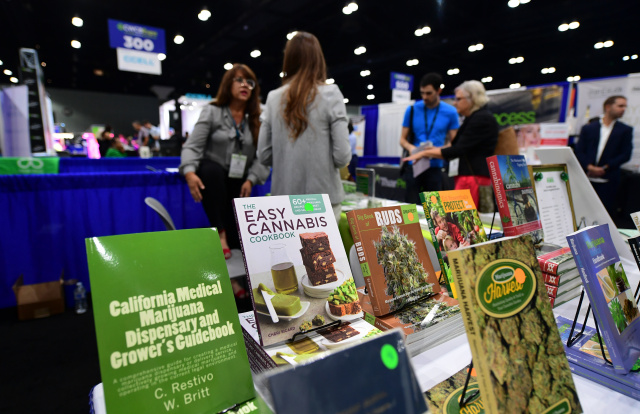 Books on all things Marijuana-related are on display at the Orange County NORML booth at the 6th Annual Cannabis World Congress and Business Expo at the LA Convention Center in Los Angeles, California on September 26, 2019. (Frederic J. BROWN / AFP)

(AFP) - People with psychiatric disorders may want to pass on the joint -- at least until further research is done, a new Australian study suggests.

The paper, published Monday in The Lancet Psychiatry, looked at 83 previous studies conducted over almost four decades on medical cannabinoids, including products from the cannabis plant, such as leaves, buds and oils.

Cannabis and cannabinoids are increasingly being made available for medicinal use in North America, Britain and Australia without undergoing standard testing, lead author Louisa Degenhardt told AFP.

"One of the most striking things about the spread of legislation in multiple countries permitting cannabis/cannabinoids for medicinal purposes is that this is in many instances happening outside of the regulatory frameworks that medicine development typically occurs within," said Degenhardt, from the National Drug and Alcohol Research Centre at the University of New South Wales in Sydney.

The study found that after chronic non-cancer pain, mental health is one of the most common reasons for using medicinal cannabinoids.

But no reviews have considered the varying effects of the different types of cannabinoids or their safety, and the only studies into long-term effects were conducted on individuals using cannabis for recreational use.

In most randomised-controlled trials of the effects of cannabinoids on depression and anxiety, the use was related to another condition, like chronic pain or multiple sclerosis.

Some studies showed improvement in anxiety symptoms, but it was unclear if that effect was due to improvements in the primary condition.

In one small study of patients with psychosis, pharmaceutical THC -- the active substance in cannabis -- actually worsened symptoms.

There are safety concerns as well.

"There are risks of developing dependence upon cannabis," said Degenhardt. "There are also risks if someone drives while intoxicated, and there [is] evidence that people who use cannabis regularly may be at increased risk of developing depression and psychotic symptoms."

Also, getting the drugs via the illicit market "carries risk of prosecution as well as unknown product content, quality and safety," added Tom Freeman, of the Addiction and Mental Health Group at the University of Bath.

Medications that are proven to be effective and aren't addictive already exist for many of the conditions for which cannabis is being used, said Deepak Cyril D'Souza, of Yale University School of Medicine's Department of Psychiatry, who wrote a commentary on the study.

David Nutt, Head of the Centre for Neuropsychopharmacology at Imperial College London, said the Lancet study somewhat missed the point.

"Cannabis has been a medicine for millennia... so subjecting it to the same requirements as modern synthetic medicines is not the most obvious nor necessary way to progress," he said.