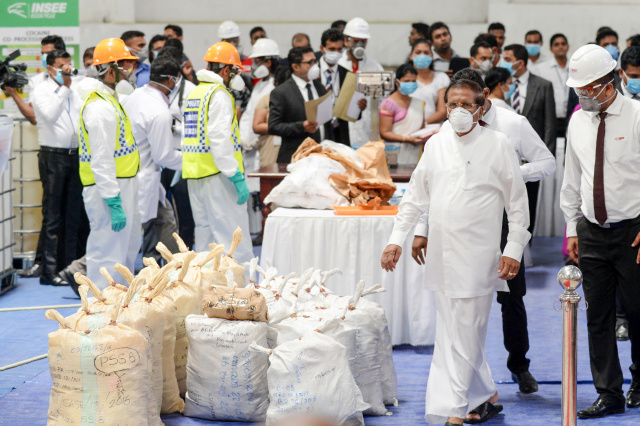 Sri Lankan president Maithripala Sirisena (2R) walks past seized cocaine prepared to be destroyed under judicial supervision at a suburb of Colombo on April 1, 2019. Sri Lankan police on April 1 destroyed nearly 800 kilos (1,280 pounds) of cocaine in the presence of President Maithripala Sirisena who has called for the death penalty for traffickers. (LAKRUWAN WANNIARACHCHI / AFP)

(AFP) - Sri Lanka's top court on Tuesday effectively blocked a plan by the president to bring back hangings for the first time since 1976 before he leaves office next month.

A three-judge bench of the Supreme Court extended on Tuesday a stay order until the hearing of 15 petitions filed against Sirisena's bid.

"The bench extended the stay order till December 9," a lawyer representing civil society groups, who call hanging a "cruel and degrading", said after a brief hearing.

Sirisena is not seeking re-election and must leave office as soon as a winner is declared after the November 16 election, more than three weeks before the court resumes hearings.

There has been a moratorium on capital punishment in the Indian Ocean island nation since 1976.

Sirisena told reporters on June 26 that he had signed the four death warrants and that he expected them to be hanged within weeks, or by before he leaves office at the latest.

Sri Lanka's last hangman retired in 2014, but officials said they had selected two out of 26 candidates to succeed him. Their names are being kept secret for fear of attacks.

Sirisena justified his decision by saying there were 200,000 drug addicts in the country, and 60 percent of the 24,000-strong prison population were drug offenders.

The Sri Lankan leader has also snubbed UN Secretary General Antonio Guterres who urged him three months ago to reconsider.

The death warrants that Sirisena says he signed will remain in force once leaves office, but his successor can withdraw them.

The ruling party candidate in the election, Sajith Premadasa, has supported Sirisena's call to resume hangings for drug offenders, but has stopped short of saying he will actually carry out executions.