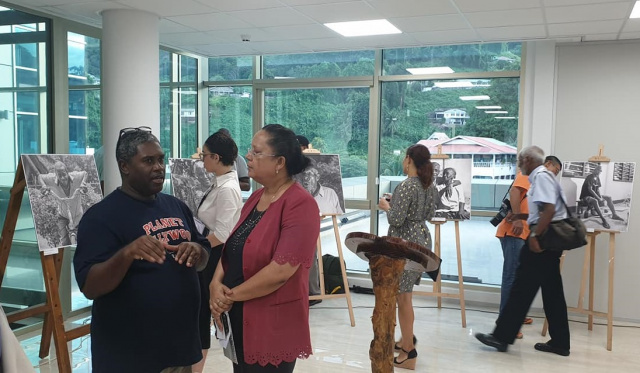 The contributions that elderly citizens – especially those from the island of La Digue - bring to the traditions and heritage of the Seychellois people are being highlighted in an exhibition.

The event – part of the 34th edition of the Creole Festival - features a series of photographs of elderly men and women from Seychelles’ third-most populated island.

‘Granmoun (Creole for the elderly) Seychelles, La Digue’ is the end product of a project implemented by students from the Seychelles Institute of Art and Design (SIAD).

Speaking at the opening of the activity earlier this week at Maison Desplanade, the chairperson of the institute, Benjamine Rose, said that the exposition is not only showcasing beautiful photographs.

There are also objects "showing quality and depth of images which tells stories of each of these senior citizens,” said Rose.

Rose added that the exhibition is one which valorizes grandparents. “How they preserved the islands cultural heritage, transmitting same to the younger generation. It further helps to capture and preserve traditions and in that case that of La Digue.”

Realised with the support of the Alliance Francaise des Seychelles, the project is a continuation of one which started in 2016 to trace the genealogical links between people from La Digue and that of Reunion – a French department in the Indian Ocean.

During the course of September five students accompanied by a photographer from Reunion and their teachers went to La Digue.

Their aim was to meet and capture the stories of these people and enrich their knowledge of the elderly who are not only full of wisdom but carries with them a wealth of traditions and heritage.

The Principal Secretary of Culture, Cecile Kalebi, explained that the project was realized through the National Fund for Art and Culture.

“The National Fund for Art and Culture is always ready to support such projects, because it not only encourages the development and talent of these young people but it encourages them to research their heritage and culture,” said Kalebi.

Kalebi added that this particular initiative “promotes the transmission of knowledge and oral traditions from one generation to another to ensure the preservation of our culture.”

Students who realized the project shared their pride in being involved with the photos on display.

Errol Mothé, said that he can now better manage his camera, manipulate light and try other photography techniques.

“I was moved by the stories of the 'granmoun' of La Digue and their way of life” recounts another student,” Josepha Morel.

The photos will remain on display all through November, at the Culture Department at Maison Desplanade in Victoria.

People from La Digue will get the chance to view the exhibition next year, when it will be set up on their island as part of activities to celebrate the 250 years of the arrival of the first inhabitant to Seychelles – 115 islands in the western Indian Ocean.

People » Be a reporter: Write and send your article » Subscribe for news alert