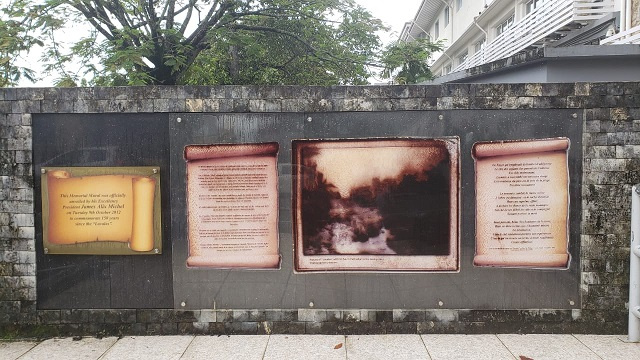 The landslide which occurred on Sunday, October 12, 1862 is the worst natural disaster that has occurred in Seychelles.  (Salifa Karaoetyan, Seychelles News Agency)

Seychelles in September launched a year-long celebration of a massive milestone: the island nation's 250th anniversary.

It was in August 1770 that a group of Europeans and their slaves arrived and made the very first settlement on Ste Anne – one of the inner islands of Seychelles, an archipelago in the western Indian Ocean.

The 15 French, seven Africans, and five Indians were the foundation of a nation populated by the Creole people, a melting pot of cultures.

SNA is also joining in the countdown where it will on a monthly basis feature a major happening that shaped the history of the island nation.

The landslide which occurred on Sunday, October 12, 1862 is the worst natural disaster that has occurred in Seychelles. After several days of torrential rain, a landslide happened and most of Victoria - the capital city -- was affected.

Seventy-five people, including children, died in the disaster. Local historian Tony Mathiot has researched the event and has also written about it.

“It was an unprecedented natural catastrophe for the archipelago of the Seychelles which was governed by the British as a dependent on Mauritius. The devastation that it caused and the suffering that it inflicted on the population of around, 7,000 inhabitants have no doubt made the lavalas the most dreadful event in the history of Seychelles,” said Mathiot.

At that time, the district magistrate, Eugene Dupuy, was appointed an acting civil commissioner and he had to contend with many difficulties in the aftermath of the disaster, from a waterlogged town to the threat of famine, the consequences of that lavalas, were appallingly horrible.

“On Sunday morning, the bodies of two nuns and eight children were recovered from the ruins of the convent. A catholic priest, Father Jeremie Giantomaso, who was the Apostolic Prefect, was rescued after having been buried under mud for almost five hours.

The rivers that flow through Victoria towards the ocean were choked with tree trunks and rocks.

The government buildings which had resisted the impact of the raging flood were buried several feet in the mud, three bridges were destroyed and the few timber dwellings that had escaped destruction had been tossed into various positions far from their original sites.

By late Sunday afternoon, scores of families who had lost their homes were snuggled together inside the Anglican church of St Paul, with the bodies of the dead children.

According to Mathiot, on the following day, the burying of the dead began “the corpses, had to be sunk by means of weight as the graves were half full of water. The two nuns were buried in the foundation of the cathedral of Immaculate Conception that was then being constructed.”

By the end of the week, people living in Victoria had to leave and take refuge in areas outside the town as the stench of dead animals and other decaying matter was posing a health threat.

For many days, Indian labourers from Mauritius and prisoners, with the assistance of liberated Africans who had started to arrive at Mahé – the main island - the previous year also helped with the work to clear the debris.

Later in October, the arrival of three boats from Mauritius Dart, Surprize and Romp brought an abundance of food provisions to the stricken inhabitants. Relief also came in the form of bags of rice, maize and other provisions such as medical supplies.

And finally, an inventory of the damage caused by the landslide was made, the destruction of life and livelihood was significant.

Many books, paintings, and historical documents of inestimable value were destroyed – a disaster of huge magnitude for a population of 7,000.

Amidst this calamity, something good did come out of the avalanche. “Victoria gained more space, as the land was reclaimed. Freedom Square created by lavalas is a place where a lot of history,” Mayor of Victoria, David Andre told SNA.

“From Gordon Square, as it was previously known, the field brings green space to the town. It is used for recreational and sporting events as well as artistic and cultural activities,” explained Andre.

Without the landslide, there would not have been important infrastructures such as the St Paul’s school – an Anglican school for girls, the Tobruk club - a place for socializing for the ex-servicemen, especially those who fought in the Second World War and in Tobruk, in Egypt.

The Camion Hall a building also known as Codevar, where local artisans can sell their artifacts and the central Taxi Stand is also built on reclaimed land from the landslide.

Mathiot also added that there is a lesson that humans of all generations can learn from the landslide of 1862.

“At that time there was a lot of deforestation in that particular area, wood was used for charcoal, for building houses, boats and many more. I believe that erosion played a key role in the lavalas and the destructions it caused.”