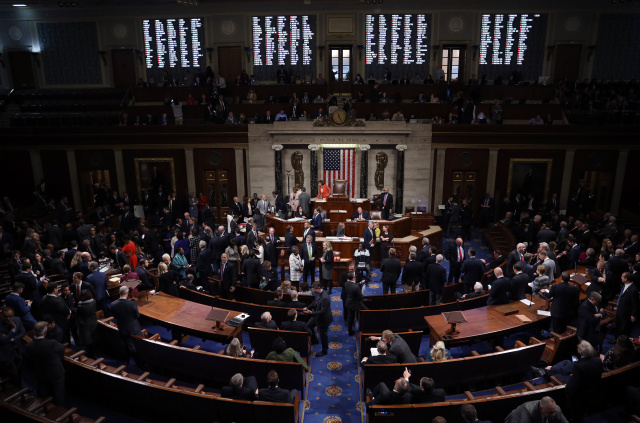 The US House of Representatives votes on a resolution formalizing the impeachment inquiry centered on US President Donald Trump October 31, 2019 in Washington, DC. Congress formally opened a new, public phase of its presidential investigation Thursday as US lawmakers voted for the first time to advance the impeachment process against Donald Trump. The chamber voted largely along party lines, 232 to 196, to formalize the process, which also provides for opportunities for Trump's counsel to cross-examine witnesses. (Win McNamee / POOL / AFP)

(AFP) - A deeply divided Congress formally opened a new, public phase of its investigation into Donald Trump on Thursday as US lawmakers voted for the first time to advance the impeachment process targeting the US president.

"Today the House takes the next step forward as we establish the procedures for open hearings... so that the public can see the facts for themselves," said House Speaker Nancy Pelosi, Washington's top Democrat.

"What is at stake in all of this is nothing less than our democracy."

The House of Representatives voted along party lines, 232 to 196, to pass a resolution that lays out guidelines for the next stages of the impeachment process.

All Republicans opposed the measure, despite agitating for weeks for such a vote that could end the secretive depositions and bring the process into the open.

Democrats are seeking to learn whether Trump abused his presidential power by pressuring a foreign government to investigate a domestic political rival.

Trump has repeatedly branded the inquiry illegitimate and said it is politically motivated, a theme he returned to in the wake of the vote.

"The Greatest Witch Hunt In American History!" he said on Twitter.

The White House accused opposition Democrats of being "fundamentally un-American" in their "unhinged obsession with this illegitimate impeachment."

"Democrats are choosing every day to waste time on a sham impeachment -- a blatantly partisan attempt to destroy the President," Press Secretary Stephanie Grisham said in the statement after the vote.

Trump meanwhile called on his fellow Republicans to support him even as he faced the embarrassing likelihood of becoming the third president in history to be impeached and placed on trial for removal in the Senate, over an alleged scheme to extort Ukraine's help to get him reelected in 2020.

The embattled president retweeted a rallying cry from Fox News host Laura Ingraham that called on Republicans to "stand together and defend the leader of their party against these smears."

Trump is accused of withholding military aid to compel Ukraine to mount a corruption probe against his Democratic election rival Joe Biden -- effectively using US foreign policy in an illegal shakedown for his personal political benefit.

Congressional investigators have heard a steady flow of corroborating evidence from government officials testifying behind closed doors on Capitol Hill.

The landmark resolution did not have unanimous Democratic approval. Two Democrats joined all Republicans in opposing the measure, although former Republican Justin Amash, now an independent, supported it -- and offered a searing warning to his old party.

"Excusing his misbehavior will forever tarnish your name," he tweeted to Republicans regarding Trump. "History will not look kindly on disingenuous, frivolous, and false defenses of this man."

The inquiry now moves into the public eye -- giving Americans the chance to hear on live television the evidence against Trump.

The House Intelligence Committee, which has led the inquiry so far, will host open hearings, presenting witnesses and documentary evidence and allowing Republicans to challenge the case against Trump.

The minority can also suggest subpoenas but majority Democrats have final say, a rule that has angered Republicans.

Democrats argue that the vote neutralizes a key Republican talking point that the inquiry has no validity because the full House did not sign on.

If the case against Trump is deemed strong enough, the House Judiciary Committee will draw up formal charges against the president -- articles of impeachment -- to be voted on by the full House.

It remains unclear how quickly the process can advance. Some say the Democratic-led House could impeach Trump by year end.

He would then be tried in the Senate, controlled by Republicans.

Nearly a dozen witnesses so far have confirmed in House depositions the accusations that, in a concerted effort with top aides and his personal lawyer, Trump pressured Ukraine to help his 2020 re-election effort by producing dirt on Biden, the former vice president.

The allegations focus on a July 25 phone call in which Trump pressed Ukraine President Volodymyr Zelensky to open investigations into Biden and Biden's son, who worked with a Ukraine energy firm.

The White House has released a rough transcript of the call, and Trump said in an interview published Thursday that he hoped to read it on TV to the American people.

"At some point, I'm going to sit down, perhaps as a fireside chat on live television, and I will read the transcript of the call, because people have to hear it. When you read it, it's a straight call," Trump told the Washington Examiner.

The revelation corroborates testimony provided last week by the top US envoy to Ukraine, Bill Taylor, who expressed concern that Morrison informed him of the quid pro quo with Ukraine.

"I can confirm that the substance of his statement, as it relates to conversations he and I had, is accurate," Morrison, who resigned Wednesday, testified in his opening statement obtained by US media.

General » Be a reporter: Write and send your article » Subscribe for news alert
Tags: US, politics, congress, Trump, impeachment