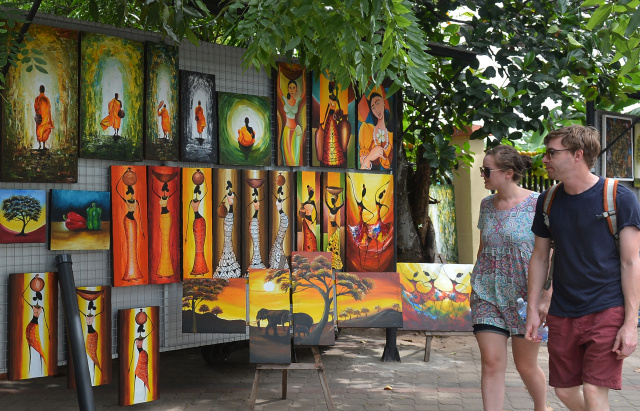 Tourist walks past paintings for sale at a roadside stall in the capital Colombo on July 19, 2018. (LAKRUWAN WANNIARACHCHI / AFP)

Growth was likely to hit 3.5 percent next year from this year's forecast of 2.7 percent, the Washington-based lender said, compared to 3.2 percent in 2018.

The country estimates it will lose about $1.5 billion in tourism revenue this year as a result of a sharp dip in arrivals following the jihadist attacks on churches and hotels, which killed at least 269 people.

"The authorities are taking actions to mitigate the revenue shortfalls caused by the terrorist attacks and preserve the hard-won gains made under the program," said IMF deputy managing director Mitsuhiro Furusawa in a statement.

Furusawa's comments coincided with the latest tranche of a $1.5 billion IMF bailout package for Sri Lanka first approved in 2016.

He warned that Sri Lanka would need to maintain fiscal discipline in order to rein in public debt, while acknowledging the need for urgent social and investment spending.

Sri Lanka votes in presidential polls on November 16 and parliamentary elections next year, raising fears of welfare spending at the cost of a budget black hole.

Official figures show that Sri Lanka will have to repay a record $5.9 billion in foreign loans this year.