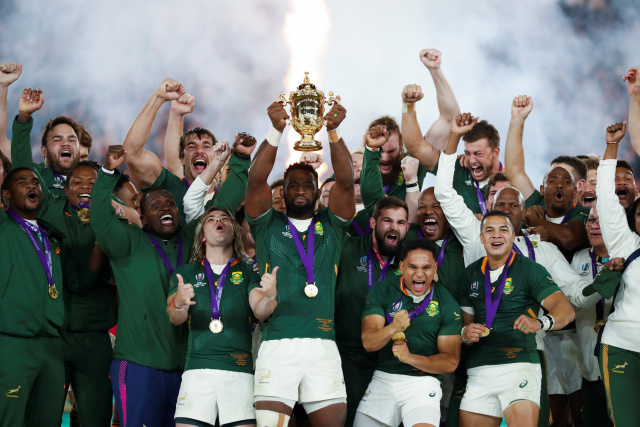 The significance of Kolisi lifting the trophy after a 32-12 victory over England in Yokohama resonated across South Africa.

During the years of apartheid, rugby was clearly identified as the sport of the country's white minority.

When Kolisi was made South Africa's first black Test captain last year, it felt as if a barrier had been broken down -- and in Yokohama on Saturday his achievement, and the team's gradual racial transformation, was there for the world and millions of South Africans back home to see.

"Knowing where we come from as a country and to see Kolisi lift the trophy is absolutely monumental. It is really an incredible moment. Tears come to my eyes," said Tshenolo Molatedi, a 26-year-old who watched the match at a Johannesburg sports club.

Joseph Mitchell, 50, a black actor, said the victory would have enormous significance.

"We are now 25 years into democracy and for the last 25 years whites have dominated rugby and everything! It’s about time that people of colour can come forward to prove to the world that we are capable and probably better."

The apartheid-era legacy meant that whites dominated the Springboks' previous two World Cup-winning teams, despite only representing 10 percent of the South African population.

Only one black player, Chester Williams, was in the victorious 1995 team and two, JP Pietersen and Bryan Habana, were part of the Springboks team that triumphed again 12 years later.

On Saturday, black wingers Makazole Mapimpi and Cheslin Kolbe scored the two late tries that put the final beyond the reach of England, who were pre-match favourites.

"If you give black people a chance they can deliver and today's win is a proof of that," said Tsakane Mabunda, 45.

"Our father, Nelson Rolihlahla Mandela, is smiling from the heavens today. Halala Siya Kolisi, treasure of the nation!" another of the heroes of the fight against racial segregation, Desmond Tutu, said in a congratulatory message to the team.

A quarter of a century after the fall of apartheid, South Africa is still riven by racial tensions and deep economic inequality between whites and blacks remains.

But Tom Hammonds, 34, a white teacher, said the Rugby World Cup had united the country.

"We feel we are the Rainbow Nation. We have had a lot of problems in this country but sports always bring us together," he said.

The ruling ANC also drew on Mandela's legacy to express its hope that the World Cup win would bring lasting dividends.

"Sport is one of the biggest catalysts of social cohesion and nation building, bringing together all South Africa’s people," it said in a statement addressed to the team.

"Thank you for reigniting the Madiba magic - and making our Rainbow nation come alive."

In Cape Town, the crowd watching the match on big screens erupted in joy at the final whistle.

"Look around, we have black, white, coloured ... we are all united here today,” said Justin Johnson, a 35-year-old IT worker.

"The Springboks have done more for South Africa than any political party.

“I feel like in 1995 and even 2007 the Springbok emblem was still synonymous with the old regime and caused a lot of division. But today I think we have come full circle."