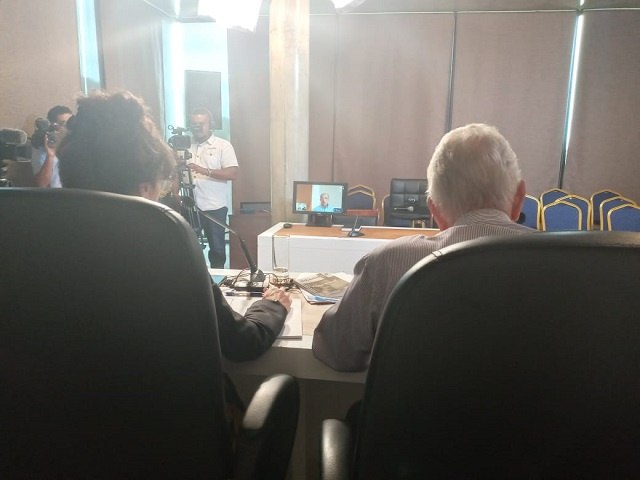 Michel gave his testimony before the Truth, Reconciliation and National Unity Commission on Tuesday morning via video link from Abu Dhabi. (Rassin Vannier)

(Seychelles News Agency) - Former president James Michel said the coup d’état of June 5, 1977 was necessary to bring about a radical change in Seychelles and social justice for all.

Michel made the statement before the Truth, Reconciliation and National Unity Commission on Tuesday morning in a testimony via video link from Abu Dhabi.

He had been invited to shed light on events leading up to the coup, what happened on that day itself and its aftermath.

In a statement read prior to answering questions from the commissioners, Michel said he decided to come forward on his own free will, has not been coerced to appear before the commission and had no hidden agenda. He said he was overseas for personal commitments but since he did not wish to delay the commission’s proceedings, had opted for the teleconference.

“I am not afraid of the truth and I have nothing to hide despite the lies and rumours to the contrary on social media,” said Michel.

On the outset he invited anyone who wanted to know his account of the coup d’état to read his book, ‘Distant Horizons’, where he has documented his experiences concerning the coup.

Michel confirmed that his main role on June 5 was to relay information from former President Albert Rene - who was the commander in charge - to the two groups involved in operations.

“I was in charge of communications and I had only a walkie-talkie to do this. I didn’t have any guns. The gun seen in my possession in some photos taken on that day was from the police armoury,” said Michel.

He told the Commission that only a handful of people had knowledge of the coup and some found out about the coup on the day itself.

“Rene was an expert strategist and powerful leader who ensured that each member of the team knew only what they needed to know and at the appropriate time as well. When the time arrived for the coup, we were all brought together for the execution of the plan,” he said.

Michel also informed the Commission than only a handful of men were trained for the operation.

“I believe there were a few, maybe four people, were trained. In my case, I was shown how to assemble and disassemble a gun during a trip to Tanzania. I also explained in my book that exercises were done on Ile Du Souette where the targets were rabbits. One was even offered to President James Mancham when he enquired about the shooting,” said Michel.

The former president was also asked to authenticate a speech allegedly delivered by Rene on the eve of the coup where he informed the men about the coup and the first plan to seize the armoury at the police stations.

An excerpt of the speech was played before the commission and Michel confirmed that the content of the tape was what was said by Rene on the eve of June 5.

Michel was also asked about the deaths of several individuals who were killed prior and during the coup, and during the one-party system that ensued from June 5, 1977 and for the next 16 years.

He told the Commission he had no knowledge about how the men died and he was not involved with the enquiries into their deaths as at the time he was not the minister for internal affairs or in charge of the police.

With regard to the death of Democratic Party activist Davidson Chang Him, who was shot dead at the Central Police station in the afternoon of June 5, Michel said he did not witness the incident.

“In the afternoon I was given a gun and was asked to secure the port and airport, as well as to patrol the south region of the main island Mahe. So I was not at the police station when he was shot,” said Michel.

He described Chang Him’s death and two other deaths on the day – that of Berard Jeannie and Francis Rachel - as “tragic and regrettable”.

“I knew Jeannie personally as his family lived next to mine at Anse Boileau, and in the army, I was the political education officer so I was the one who personally recruited Francis Rachel. So their deaths were tragic and regrettable,” he added.

Michel also maintains that the coup d’état was justifiable as it was needed to bring about a radical change in the country following independence where the status quo remained.

“It is as a result of the coup that today we have equality in opportunities for all, a person can have his or her own home and property, access to education and health for all. It is because of the coup that a class system was banned. So I believe this radical change was necessary,” said Michel.

The Truth, Reconciliation and National Unity Commission says it plans to invite Michel at a later date to answer questions about security and intelligence in the country after the coup following many complaints of abuse by the military.

The Commission is listening to complaints and grievances related to the coup d’etat and has a three-year mandate.